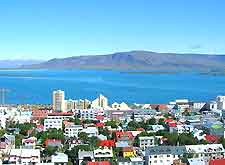 The northernmost capital city anywhere on the planet, Reykjavik is Iceland's most visited city and is considerably milder than many visitors expect. Reykjavik is situated along the Atlantic Ridge and framed by the imposing Mount Esja, and whilst this is very clearly a modern and advanced city, it does also offer a successful blend of tradition and history.

Reykjavik's fishing industry has long been associated with the city, along with its neighbouring hot springs and extremely beautiful natural scenery. During the summer, the midnight sun reigns down and keeps the city lit and very much awake all through the night, while the winter months are a much quieter affair and a good time to see the Northern Lights (aurora borealis).

Known locally in Icelandic as the Upplysingamiostöo Feroamála, the Reykjavik Tourist Information Office can be found within the very city centre and on the Adalstraeti. You should come here for everything to do with Iceland's tourism industry, and to find out about cruises around Faxafloi Bay and the seasonal whale-watching trips, which depart from Hafnarfjörour Quay from May to September. 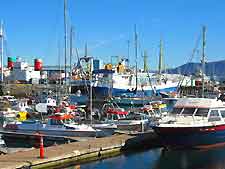 A guided bus tour of the city is always a good way to start your first day in Reykjavik and provides you with an overview of the main sights. If you are interested in Iceland's volcanic history, then visit the popular Red Rock Cinema and enjoy its 'Volcano Show', or alternatively, spend a day at the Nauthólsvik Thermal Beach and enjoy the geothermally heated beachfront and waters. For families in Reykjavik, the friendly farmyard animals at the Húsdyragarourinn Zoo will be sure to put smile on everyone's face, while for a touch of culture, head to the Háskólabió Concert Hall and enjoy a performance by the Icelandic National Symphony Orchestra. More information about Reykjavik Tourist Attractions.

Sporting a rich heritage and containing a number of old and important buildings, two of the most notable landmarks in Reykjavik are churches. The Landakot Church (Landakotskirkja) was built in the late 1920s and is known for its wooden statues. Considerably more youthful is the contemporary Church of Hallgrimur (Hallgrimskirkja), which dates back to the mid-1980s and boasts a dramatic spreading base and tall steeple. Something quite different is sited on the very outskirts of Reykjavik and on the Island of Vioey. Here, John Lennon from legendary rock group 'The Beatles' is remembered at the Imagine Peace Tower. More information about Reykjavik Landmarks. 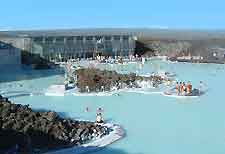 This region has led a particularly interesting past and a wealth of local history is to be found within the National Museum of Iceland, where the heritage of the country is celebrated and numerous archaeological treasures exhibited. Part of the National Museum itself, the Icelandic Maritime Museum lies in nearby Hafnarfjörour and feature endless exhibits and information about fishing and seafaring. Providing interest to all ages, the Reykjavik Museum of Natural History contains many plant and animal specimens and is situated next to the Hlemmur bus terminal. If you feel in the mood for a gallery, then the best include the Art Gallery Fold, the Gallery Reykjavik, the National Gallery of Iceland, and also the Reykjavik Art Museum, which comprises no less than three separate museums, including the recent addition of the Harbour House. More information about Reykjavik Museums and Reykjavik Art Galleries.

Tourists will find that exploring the region outside of Reykjavik can be extremely rewarding and many recreational activities present themselves close by, such as those at the Hvammsvik Outdoor Centre in Mosfellsbaer and around Mount Esja. However, it is the steaming mineral-rich waters of the Blue Lagoon Spa at Grindavik where most people head first, although between the winter months of January and April, the neighbouring ski resorts of Bláfjöll and Skalafell are equally popular and soon begin to fill up with all ages and abilities. More information about Reykjavik Attractions Nearby. 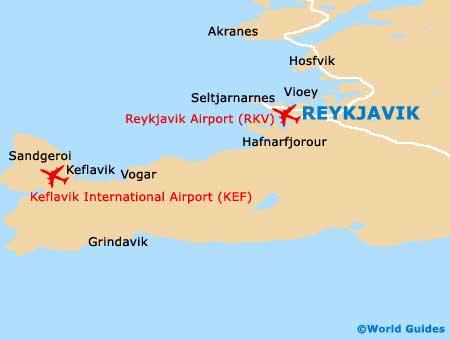