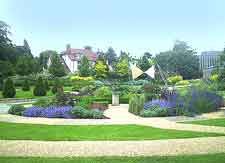 Festivals and celebrations are plentiful all year round in Nottingham and there is always something going on either in the city centre or nearby. Many of Nottingham's most popular festivals take place during the summer months and often feature medieval, Robin Hood themes and plenty of fun for all of the family.

Further highlights in the city's busy calendar include many activities during school holidays, sporting events - including the Nottingham Open tennis tournament in June, a Gay Pride festival in July, and the Riverside Festival next to the River Trent each August.