Located on the northern side of Vietnam, Hanoi serves as the Vietnamese capital, although it not actually the largest city in the country - Ho Chi Minh City has earned that particular title. Hanoi lies on the right-hand side of the Song Hong (Red River) and is often described as being an appealing blend of 'East meets West', with both an oriental and colonial past.

Two bridges span the Red River. The historic Long Bien Bridge dates back to 1903 and currently only used by trails, moped and bicycles, as well as pedestrians. Close by and to the south, the more recently built Chuong Duong Bridge is much more modern in design and sees much traffic on a daily basis.

The very heart of the city has grown up around the Hoan Kiem Lake and is steeped in history. Head just a short distance to the north and you will soon discover the Old Quarter, where many tourists choose to base themselves, due to its colourful character and vibrancy. The Old Quarter is full of narrow lanes, short streets and old buildings.

The ancient Hanoi Citadel is located on the westerly side of the Old Quarter and is a particularly attractive sight, although is now sadly closed to members of the general public. To the west is Ho Chi Minh's Mausoleum, as well as a series of grand foreign embassies boasting French-influenced architecture.

Maps of Hanoi are available in all sizes, being available to purchase at most bookstores. If you are intending to use bus transport during your stay, then bus maps (Xe Buyt Ha Noi) are essential. 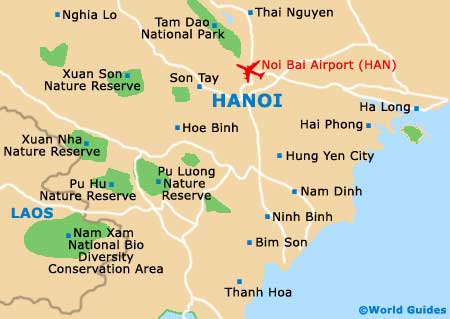