The beachside port city of Kuantan is the capital of Pahang, the largest state of Peninsular Malaysia. Lying on the Kuantan River estuary, halfway between Kota Bharu and Singapore, the city resides on the peninsula's east coast. Kuantan is known as a tropical getaway, with tourism the mainstay of its economy and looking to become even more important due to the ongoing development of its Bukit Gamban Resort City.

The city's major visitor draws are its great beaches, of which the city boasts a higher number than any other Malaysian destination. Although Kuantan is now home to more than 500,000 residents, its laid-back vibe makes it a truly relaxing place for holiday makers. Tourist information about Kuantan and its surroundings is easily obtained at the tourism outlet on the Jalan Mahkota, next to the local taxi stand and bus station.

Located just a short distance from Kuantan and directly to the east, the white-sandy Teluk Chempedak Beach is where most people on holiday tend to hang out, being conveniently close to the Royal Pahang Golf Club. Backed by pine trees and casuarinas, this beach comes with plenty of opportunities for water sports, swimming, surfing, jet skiing and sailing, with all of these activities being especially popular here. The Hyatt Regency Kuantan Hotel fronts the Teluk Chempedak Beach and features no less than three modern restaurants with stunning panoramas of the South China Sea. Further beaches within reach of the city include Beserah, Chendor and Cherating, the latter of which is home to a very dedicated turtle sanctuary. More information about Kuantan Beaches.

When you first arrive in Kuantan, do consider joining one of the city's popular and extremely informative daily walking tours, which generally last a couple of hours and take in the main tourist attractions. If you prefer to sightsee according to your own schedule, then worth noting is the bustling Sunday Market (Pasar Tani), the scenic and relaxing cruises along the Sungai Kuantan river, and the seafront park of Taman Gelora, which offers all of the usual recreational facilities that you would expect in a public park. Slightly outside of Kuantan is the neighbouring fishing village of Beserah and the truly breathtaking Sungai Pendan Waterfall, where a large natural pool is suitable for swimming. Sports fans may be lucky enough to catch a soccer match at the Darulmakmur Stadium, or perhaps be able to spend an afternoon betting on the horses at the Indrah Makota Indo Stadium. More information about Kuantan Tourist Attractions.

There are certainly a fair few landmarks peppered around Kuantan, many of which are completely natural and often located along the coastline and river. If you are here for the man-made Malaysian sights and heritage, then without question it will be the Sultan Ahmed Shah State Mosque (Masjid Negeri) at the top of your list for its sheer grandeur. The Hindu temple of Kuil Sri Mariamman Kuantan is another very noteworthy landmark, although not so imposing, while both the Lao Tzi Taoist Temple and the Wat Fo Tien Temple are major tourist magnets, with their Golden Dragon sculpture and innumerable Buddha images respectively. At the city's rather elevated Buddhist Temple, the cityscape views are hard to improve upon and the friendly turtles always enjoy being fed by visitors. More information about Kuantan Landmarks and Monuments.

As the state capital, Kuantan and its surroundings are home to a reasonable selection of museums, although they are far from in plentiful supply. The best information is to be found at the outlying Sultan Abu Bakar State Museum (no more than an hour away), where the rich heritage of Pahang's Sultanate is explained by means of Chinese artefacts and various documents. At the city's riverside Watercraft and Boat Museum, you can learn all about how the region's sea and river travel has evolved over the centuries. Close by and easily reached are both the Sungai Lembing Museum and the Pulau Keladi Cultural Village, and if you fancy hopping over to the island of Tioman (Pulau Tioman), then you can visit the local museum whilst also experiencing the actual tropical 'Bali Ha'i' landscape that featured in the famous South Pacific musical movie of the late 1950s. More information about Kuantan Museums.

If you are able to, then renting a hire car will make getting around the state of Pahang all the more easy, with various day trips becoming practicable. Eco-tourists will love exploring the virgin forests at the Taman Negara National Park, where jungle hikes, lakes and waterfalls are all part of the overall appeal. Roughly 30 minutes to the north are the holy Gua Charas Caves, and slightly further north is the royal town of Pekan. The Chini Lakes (Tasik Chini) and the Orang Asli Villages may both appeal to day trippers, and although the refreshingly cool Cameron Highlands are too far away for a quick excursion to be possible, their tea plantations, period cottages and strawberry fields should not be overlooked if you are heading in this direction. More information about Kuantan Attractions Nearby. 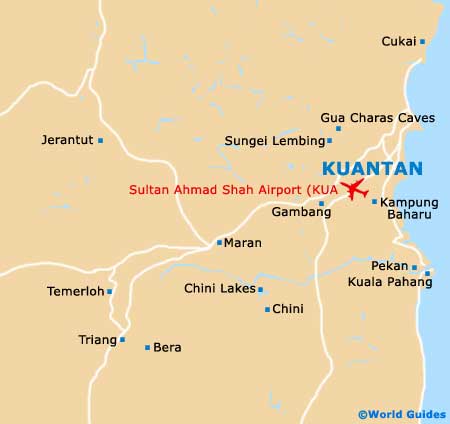