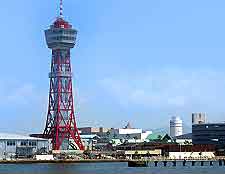 The largest city on Japan's island of Kyushu, Fukuoka is the capital of the prefecture of the same name. Fukuoka was actually once two separate towns, the castle town of Fukuoka and the smaller town of Hakata, separated by the winding river Naka-gawa. Merged at the end of the 19th century, Fukuoka was grown in strength ever since and today commands a definite tourist appeal, becoming known for its beautiful women, Chinese-inspired 'ramen' noodle dish, and also its highly acclaimed Daiei Hawks baseball team.

In the past 20 years, the transformation of Fukuoka has been remarkable and this diverse city has been particularly multicultural and international, standing out from other Japanese cities. Tourism in Fukuoka has never been better and whilst many of the top tourist attractions are fairly modern, there are plenty of worthwhile sights to see and things to do. For tourist information in Fukuoka, head to the tourism bureaus at the JR Hakata Station, Fukuoka Airport and Tenjin district. 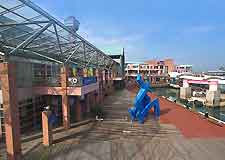 Full of tourist attractions and sights worth seeing, visitors to Fukuoka city will always find plenty of things to see and do. Amongst the most popular attractions are the city's superb sandy beaches, which are used for a range of water sports and never far from restaurants, bars and entertainment venues of all descriptions.

Also worth looking out for, Canal City is a large development and often referred to as a 'city-within-a-city', being home to an amusement park and central amphitheatre, while for something quite different, why not try young hand at skiing on the artificial snow at the BigAir skiing and snowboarding park. For a little quiet respite, Fukuoka is full of green spaces, such as the Ohori-koen Japanese Garden, Chuo Park, Maizuru Park, and also the Botanical Gardens within Minami-koen Park, which stands next to the equally appealing Fukuoka City Zoo. More information about Fukuoka Tourist Attractions. 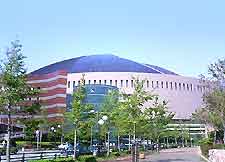 Around the city you will find many eye-catching landmarks, which are often hard to miss and offer information about Fukuoka's interesting past. Whilst in the city, look out for the remains of Fukuoka Castle, which dates back to the early 17th century and once featured almost 50 different turrets. Other prominent landmarks include the historic Hakozaki Shrine, Shofukuji Temple and Tochoji Temple, and also the Fukuhaku Deai Bridge, which spans to River Naka and often features street entertainers and food stalls. More information about Fukuoka Landmarks. 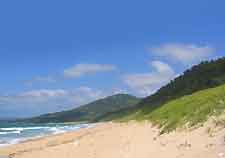 A city of culture, Fukuoka is home to a number of celebrated museums and highly acclaimed museums. In particular, the Fukuoka City Museum is especially popular and home to an array of historic information about the changing face of the city over the years, while the interactive exhibits at the Saibu Gas Museum are sure to be a big hit with young children. For art lovers, a range of choices are on offer, with firm favourites such as the Asian Art Museum, the Fukuoka Prefectural Museum of Art, the Fukuoka Art Museum and the impressive Tanakamaru Collection. More information about Fukuoka Museums and Fukuoka Art Galleries. 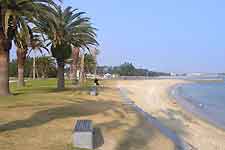 Fukuoka has enough tourist attractions to keep you more than happy for many weeks. However, if you are looking for a change of scenery, a number of prominent towns and cities are close to Fukuoka and make excellent excursions and daytrips. Many people staying here choose to visit the nearby city of Nagasaki, where a selection of outstanding museums and restaurants are available, together with areas of extreme natural beauty. Also close to Fukuoka, many temples, shrines, castles, ruins and Japanese gardens reside in Dazaifu, Futsukaichi Onsen, Karatsu, Kumamoto and Kurume. More information about Fukuoka Attractions Nearby.