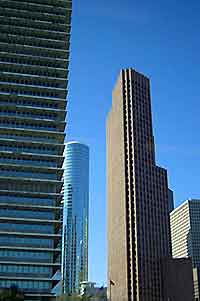 Houston contains as many sparkling skyscrapers as America's other great cities and is not short on prominent landmarks and monuments, many of which hold much historic value and cultural importance for the whole state.

Chase Tower is one of Houston's most striking landmarks and is a great place to start any tour of Houston, offering an unrivaled vantage point of the city from the 60th floor. Houston's fortress-like City Hall is the official seat of Houston power, while the Julia Ideson Library building shows off Renaissance architecture at its best and the Nina Vance Alley Theater holds particular cultural appeal.

Address: 600 Travis Street, Downtown, Houston, Texas TX, 77002, USA
Originally planned to be taller and sometimes referred to as the Texas Commerce Tower, Houston's JP Morgan Chase Tower is the tallest building in Houston and rises to 75 storeys, making it one of the city's most eye-catching landmarks. The observation deck is the highlight of this huge edifice and is situated on the 60th floor, where views of the city are outstanding, with access provided by an express lift. Chase Bank also owns several other impressive buildings in the city.
Open hours: daily
Admission: free 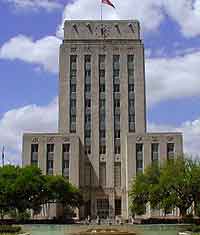 Address: 500 McKinney, Houston, Texas TX, 77002, USA
Tel: +1 832 393 1313
Built in the 1920s, the Spanish Renaissance style Julia Ideson Library building was the only structure built from the original civic center plan in Houston. The library houses the impressive Circle M. Collection, while the new Houston Public Library is linked to the Ideson Library by a tunnel and contains millions of books.
Open hours: Monday to Friday - 09:00 to 18:00
Admission: free

Address: 615 Texas Avenue, Houston, Texas TX, 77002 USA
Tel: +1 713 228 8421
Located in downtown Houston, the Nina Vance Alley Theater has a variety of events year round including children's performances and was founded by Nina Vance in 1969. The complex has two theaters, the 824-seat Hubbard Stage and the 310-seat Neuhaus Stage. This is one of the most highly regarded residential theaters in the country.
Open hours: box office hours, Monday to Saturday - 10:00 to 18:00, Sunday 12:00 to 18:00
Admission: charge

Address: Downtown Houston, Texas TX, USA
Located in the heart of downtown Houston, the Oscar F. Holcombe Civic Center is a multimillion dollar complex created by the mayor of the same name. There are four exhibition buildings here, the Jesse H. Jones Hall, Music Hall, Sam Houston Coliseum and Albert Thomas Convention Center. The various buildings hold events, operas, ballets and trade shows throughout the year and lie in an area that is awash with shops and restaurants.
Open hours: hours vary
Admission: charge for events