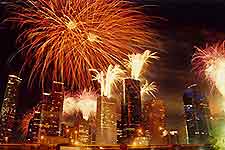 There are festivals and events happening all over Houston throughout the year in the city's many parks and through its historical streets. Houston's various colorful festivals include sporting events, walking tours, a Japanese festival, July 4 festivities, music festivals and boating parades.

If nothing seems to be on during your visit, head for Tranquility Park outside of Houston's City Hall, where shows are often held. There is always a wide range of things to do in Houston.