Founded in 1558, the Venezuelan city of Merida, in the foothills of the Venezuelan Andes, is the capital of its province of the same name. One of the principal cities in the country, Merida stands along the valley of the River Chama, against the backdrop of the country's highest peak, the snow-capped Pico Bolivar mountain. Ranking amongst the most-visited tourist destinations in Venezuela, the city is home to colonial mansions, historic squares, museums, beautiful religious buildings and churches, and is set amidst dramatic countryside.

The city's 300,000+ residents, including a substantial student population, live surrounded by some two-dozen parks and botanical gardens, and at least a dozen squares, enjoying facilities such as shopping malls, art galleries and five theatres, all holding regular performances. Merida is a significant cultural centre, with dance and music playing an integral part of everyday life, along with tourism.

Its unique culture derives from its former geographical isolation from the rest of the country and is based on Andean folklore. Deep connections with its ancient past are seen every day in the well-preserved traditions, relaxed lifestyle, local arts and crafts, and regional cuisine. Extensive tourist information relating to the many things to see and do in Merida can either be accessed at hotel front desks or found at the Cormetur (Corporacion Meridena de Turismo) outlets around the city. These tourism offices are located on the corner of Calle 45 and the Avenida Urdaneta, at the bus terminal on the Avenida La Americas, and at the Mercado Principal.

Merida is a major draw for tourists looking for the best in Venezuelan adventure sports and recreational activities, with white-water rafting, canyoning and paragliding all being available, along with trails for mountain bikes and hiking, and some lofty zip lines. Hiking around the Venezuelan Andes is particularly good at both the easterly Parque Nacional Sierra Nevada (Sierra Nevada National Park) and the northerly Parque Nacional Sierra La Culata (Sierra La Culata National Park), with paragliding best at Las Gonzalez, and rafting available on the rivers running down the Andes slopes.

The central Bolivar Square (Plaza Bolivar) is a good place to first acquaint yourself with the city and its colonial buildings. Families on holiday in Merida will enjoy spending time at the Zoological Park (Parque Zoologico Chorros de Milla) or at the Venezuela de Antier theme park, while soccer fans may be lucky enough to take in a football match at the city's Metropolitan Stadium (Estadio Metropolitano). More information about Merida Tourist Attractions.

There are many important buildings peppered around the city centre, with the Cathedral (Catedral de Merida) on the Plaza Bolivar being one of the most obvious and beginning its life in the early part of the 19th century, although its lengthy construction period spanned 150 years and resulted in a mixture of different architectural methods and styles. Also located on the Plaza Bolivar is the Archbishop's Palace (Palacio Arzobispal) and the Equestrian Statue of Simon Bolivar. Further sightseeing is possible along the Avenida 3, where the Iglesia de Nostra Signora del Carmen resides, or alternatively, take a trip along the elevated mountain road named the Pico el Aguila. More information about Merida Landmarks and Monuments.

Merida contains an especially high concentration of museums, being second only to the Venezuelan capital of Caracas in terms of quantity. There is much choice and obviously some will appeal more than others, so plan your day of culture carefully, choosing between the folk art exhibits at the Casa de Cultura Juan Felix Sanchez, the regional artefacts at the Bolivar Library (Biblioteca Bolivariana), and the archaeological information and ancient relics at the Museum of Archaeology (Museo Arqueologico).

The area surrounding Merida is packed with an assortment of attractions, which range from cultural and natural, and are generally well connected by road and buses. There are some particularly enticing towns and villages within easy reach, and the nearby Laguna de Urao is a good place to cool down during the heat of the afternoon. Day trips to the coffee plantations at nearby Santa Cruz de Moro and Jaji are also popular, as are excursions along the Trans-Andean Highway (Carretera Transandina).

Close by is the charming town of Mucuchies, which boasts a valley setting and its very own breed of dog. After a few days of sightseeing and traipsing around, the hot springs of Aguas Termales del Musui may well beckon, where camping beneath the stars is recommended. Sited roughly 90 minutes to the north-east of Merida are the towns of Bocono and Trujillo, and still in this direction, although a little closer to the city, is the colonial town of Niquitao, where sampling the local wines is almost mandatory. The nearby theme park of Los Aleros is another worthy outing and will easily fill an entire day, meaning that an early start is needed. More information about Merida Attractions Nearby. 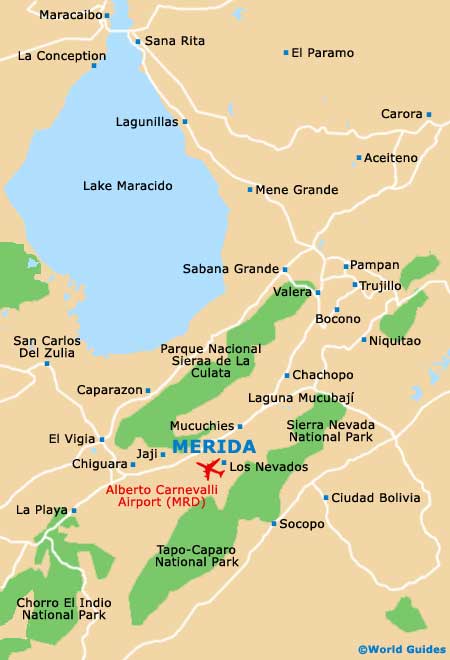