As the former colonial capital of Guatemala (and Central America), the World Heritage Site of Antigua is one of the best-preserved colonial cities in the region. This spectacularly beautiful city is noted for its Baroque architecture and old ruins, and has many impressive churches.

Lying to the south-west of the present capital, Guatemala City, Antigua is easily accessed and is the foremost tourism spot in the country, showcasing the very best of Guatemala. Its mountain setting brings Antigua a pleasant and stable warm climate, meaning that it can be visited year-round.

In addition, Antigua has an excellent selection of hotels and also boasts good shopping and eating, as well as a surprisingly high concentration of Spanish-language schools. The tourist information office known as the Instituto Guatemalteco de Turismo (INGUAT) is to be found on the Calle Oriente 2a, between Avenidas 2a and 3a, and close to both the Las Capuchinas and the Iglesia El Carmen churches.

Self-guided sightseeing tours of the city are a good way to get your bearings of Antigua and understand what it has to offer in the way of tourism and attractions. A popular route starts at the Cerro de la Cruz and passes by some of the most prominent churches in the city.

Many striking colonial buildings surround the Central Park (Parque Central), a leafy plaza where locals and tourists alike choose to hang out, admiring the mermaids in the fountain. Located on the southerly axis of the Parque Central, the Captain General's Palace (Palacio de los Capitanes Generales) dates from the middle of the 16th century and once formed the heart of Latin America's government. To the north of the plaza is the Capuchin Convent (Convento de las Capuchinas), while residing a few blocks to the west, the Antigua Market (Calz de Santa Lucia Sur) is another good place to experience city life. More information about Antigua Tourist Attractions.

The history of Antigua is one of natural disaster after natural disaster, with the city suffering at the hands of erupting volcanoes, earthquakes and floods over the centuries. In fact, it was the significant earthquake damage in 1773 that was the reason the capital status was rescinded and transferred to the safer spot of Guatemala City the following year. At that stage, it was planned to abandon the city completely, although a small population chose to stay. The following century saw much wealth brought in by surrounding coffee plantations and the city become known as La Antigua Guatemala (Old Guatemala). Considerable efforts and renovation work saw the previous colonial character of the city restored, until a further earthquake occurred in 1976. Restoration work continued, fuelled by the city gaining its title of UNESCO World Heritage Site soon after.

Considering all of the earthquake damage and devastation, visitors will be pleasantly surprised to find so many historic buildings still intact. Santiago Cathedral (Catedral de Santiago) has its origins in the middle of the 16th century and is a particularly important landmark in Antigua, as is the similarly aged Church of Saint Francis (Iglesia de San Francisco) and the Santo Domingo Church (Iglesia y Convento de Nuestra Senora del Pilar de Zaragoza). The end of the 17th century saw the arrival of the rather iconic Saint Catalina Arch (Arco de Santa Catalina), while in the 18th century, both the Merced Church (Iglesia y Convento de Nuestra Senora de la Merced) and the City Hall (Palacio del Ayuntamiento) were built. More information about Antigua Landmarks and Monuments.

With such a long and eventful history, Antigua comes with a series of museum exhibits and information to document its past life. Located at the former prison in the Palacio del Ayuntamiento is the popular Museo de Santiago (Santiago Museum), where weaponry exhibits are accompanied by instruments of torture, coins and ceramics from colonial days. Also sited at Antigua's City Hall is the Old Book Museum (Museo del Libro Antiguo) and its early printing press.

When you fly into La Aurora International Airport, it may be worth hiring a car if you are planning to get out and about during your holiday. Guatemala City is comfortably under an hour from Antigua and one day trip that most tourists choose to make, coming to admire the capital's striking architecture, tour its national museums and enjoy its massive festivals. Excursions to the surrounding volcanoes are also recommended, with the Pacaya Volcano (Volcan Pacaya) being especially close, impressive and still active, regularly spewing lava. Also close by, the Water Volcano (Volcan Agua) offers a choice of hiking trails, and guided tours of the twin-peaked Acatenango Volcano (Volcan Acatenango) provide tourists with an exhilarating experience and spectacular views across the Volcan de Fuego (Volcano of Fire).

Additional day trip possibilities from Antigua include south-westerly Ciudad Vieja (Old City), the Centro Cultural La Azotea coffee plantation next to the village of Jocotenango, the seaside village of Monterrico, and the artisan village of San Juan Comalapa. For seasonal festivals, the adjacent towns of Santiago Sacatepequez and Sumpango are hard to beat, with their joint annual Festival of the Giant Kite (Feria del Barrilete Gigante) each November being quite a spectacle. More information about Antigua Attractions Nearby. 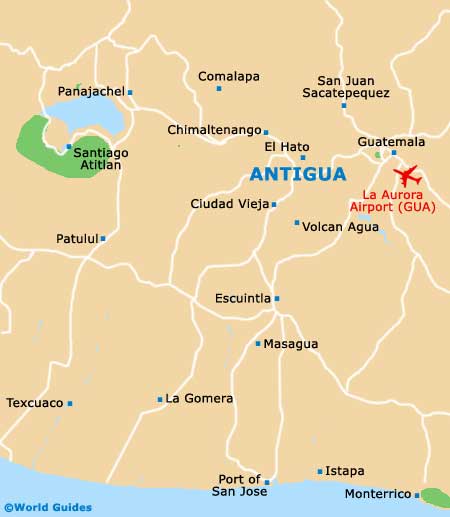