Puntarenas is both the biggest city and capital of the province of the same name and is set on Costa Rica's scenic Pacific coast. This heat-stunned city of around 110,000 people, its ageing port and its Pacific beaches may well have seen better days, but visitors still arrive here for the surfing or to catch a boat to the pristine Isla Tortuga, offshore from the city. The original harbour of Puntarenas used to serve all boat traffic, but now processes mostly cruise ship arrivals, with the majority of cargo traffic and tourist boats now centred in Caldera.

Costa Rica has been christened 'one giant nature park' many times, and it is true that the country's main attraction to visitors, apart from its capital of San Jose, is its glorious and diverse natural heritage. Many rare species of flora and fauna flourish both on the mainland and the offshore islands, undisturbed by the vagaries of modern tourism. Its coastal destinations, such as Puntarenas, are mainly underdeveloped and host few top-class facilities. Travellers looking for luxury and sophistication won't find it here, although those looking to immerse themselves in nature's wild beauty will discover a paradise.

Located just across from the pier and alongside the souvenir stalls, the Puntarenas Tourism Office is the first place that you should come for local tourist information - do note that it closes at lunchtime. Next door is the Gran Hotel Imperial and two bus stops, providing onward connections to destinations such as Jaco, Quepos and San Jose.

Residing at the end of a peninsula and with much of its coastline being sandy, central Puntarenas is surrounded by beach opportunities. With the boardwalk being recently renovated and the beaches cleaned, the city has been working hard to improve its overall tourism appeal. The Playa Dona Anna is the main beachfront here, although within easy reach are the Playa Herradura, the Playa Hermosa and the Playa Esterillos beaches. For the most pristine beaches, the ferry terminal connects those to the south of the city. More information about Puntarenas Beaches.

The tourist attractions of Puntarenas aren't exactly in abundance and most tend to be of a typical seaside holiday nature, often being close to the main southerly beachfront. One for all the family is the Puntarenas Pacific Marine Park, where many specimens from throughout the Pacific Ocean are showcased for all to admire. The Tourist Boulevard, or Paseo de los Turistas as it is known locally, makes for a pleasant evening stroll and stretches all along the southern side of the city, fronting the Golfo de Nicoya and providing good views of the arriving cruise ships from its easterly end. Sightseers should take a look at the former local prison - La Casa de la Cultura, while others may like to try their hand at sport fishing, or watch a game of football at the Estadio de Futbol stadium. For those here in the middle of July, the Festival of the Virgin of the Sea features decorated fishing boats sailing around the harbour and is worth timing your holiday for. More information about Puntarenas Tourist Attractions.

Puntarenas is not really a sightseeing destination as such, being more of a coastal resort with related attractions. However, the Puntarenas Port itself is a lively place to hang out and enjoy some seafood dining, and the Catholic Cathedral on the Central Plaza is particularly grand, with its Gothic revival architecture and tall bell tower. The Customs Building named the Capitania is another notable local site, although most of the other landmarks around the city tend to be more shaped by nature. Close by, the Central Mountains hold great appeal and offer a host of recreational activities, including trails through the dry jungles and the chance to experience some cloud forests, indigenous Costa Rican wildlife and awesome views. More information about Puntarenas Landmarks and Monuments.

If you are looking for culture in Puntarenas, then the Marine History Museum (Museo Historico Marino) is the place to head, with its in-depth information about the region's lengthy maritime heritage. This museum also comes with some interesting collections of archeological relics, old skeletons and audiovisual presentations. Apart from the Gallery Isidro Wong at the Customs Building, there it little else likely to be of interest in this category, and so for more museums, and some of Costa Rica's very best, you will need to make the two-hour journey to San Jose and enjoy its more plentiful cultural offerings. More information about Puntarenas Museums and Puntarenas Art Galleries.

Tourists based in Puntarenas and looking for a change of scenery can choose between a number of tempting excursions. Many opt to venture to the Arenal Volcano National Park (Parque Nacional Volcan Arenal) in order to experience some live volcanic action close up, relatively speaking. Others may find a trip to the Isla de Coco National Park more appealing, with this World Heritage Site being renowned for its scuba diving opportunities.

The Carara National Park (Parque Nacional Carara), the Hacienda Baru National Wildlife Refuge (Hacienda Baru Refugio Nacional de Vida Silvestre) and the Marino Ballena National Park (Parque Nacional Marino Ballena) are all also within reach of Puntarenas, each coming with their own set of attractions. At the Monteverde Cloud Forest Reserve (Reserva Biológica Bosque Nuboso Monteverde), the 70,000+ annual visitors will find a lush tropical rainforest, literally hundreds of bird species and some treetop suspension bridges, aimed to encourage the eco tourism here. Trips to the towns of Nicoya and Quepos, as well as to the highly developed city of Liberia, may also appeal. More information about Puntarenas Attractions Nearby. 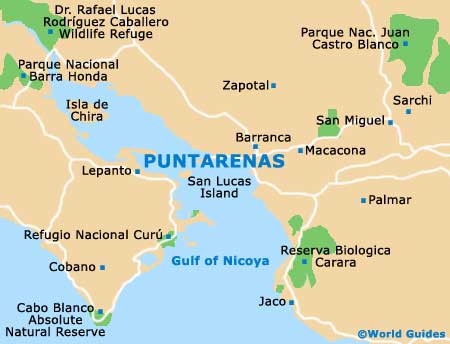