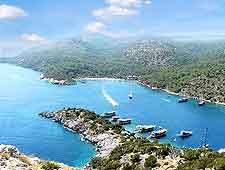 Popular with British families, the tourist resort of Oludeniz is a choice beach destination in south-west Turkey. The town is renowned for its fantastic blue-flag beach and safe waters, and although it has a degree of nightlife, is not regarded as a party destination.

It's all about the beach here, with water sports activities especially popular in the protected lagoon. However, the arrival of modern high-rise hotels along the beachfront has meant that both Oludeniz and the adjacent beach resort of Belcekiz have lost some of their earlier charm. That said, as you descend into the town from the surrounding green hills, the lagoon views are still stunning. In addition to the beaches around Oludeniz, the paragliding is some of the best in the world and goes off a high mountain (the Babadag Mountain). Tourist information can be accessed at the resort hotels, at the Oludeniz Tourism Development Co-operative (Turizm Gelistirme Kooperatifi) kiosk next to the beach, or in the nearby settlement of Hisaronu. 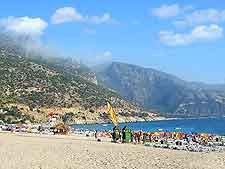 The beaches and sunshine are the principal reason that so many tourists choose to holiday in Oludeniz, with the protected Blue Lagoon (Tabiat Parki) adding to the overall appeal and offering a good choice of water sports and sandy stretches. If you enjoy outdoor activities, then as well as the outstanding paragliding opportunities, open-air attractions include a good selection of walking trails, jeep safaris, boat trips and even a spot of white water rafting. Cruises to the neighbouring Butterfly Valley are always popular and come highly recommended, as are days spent relaxing in the suburbs of Hisaronu and Ovacik, both of which cater well to visitors and offer a more laid-back, relaxed attitude to tourism. More information about Oludeniz Tourist Attractions. 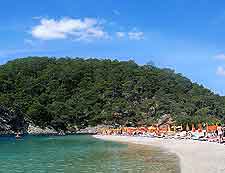 The coastline and its beaches form the main landmarks of Oludeniz, along with the imposing Babadag Mountain, which dominates the landscape with its towering peak and features a wealth of hiking trails. However, there are a handful of truly exceptional ancient sites of huge archaeological importance close by. The ruined city of Xanthos now ranks as a UNESCO World Heritage Site and this fascinating Lycian city boasts many grand remains, including a large amphitheatre and various partial structures. Surprisingly, another impressive historical amphitheatre resides in nearby Patara, a further ancient city based alongside a sweeping beachfront. Ramblers should definitely take a walk along the famous Lucian Way, which is regarded as one of the world's best trails and is at its very best in the spring or autumn, when the hot midday sun is less intense. More information about Oludeniz Landmarks and Monuments. 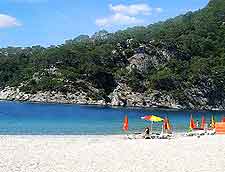 Whilst tourists certainly don't come to Oludeniz for its culture and heritage, there are a small number of museums based both in and around this part of the Mugla Province. The Oludeniz Ethnography Museum is a good place to find information about the lives of the locals through the ages, with detailed models recreating scenes from traditional Anatolian villages. Close by is the acclaimed Fethiye Museum, where Byzantine, Hellenistic, Lycian and Roman artefacts are displayed. At the administrative capital, Mugla, the Central Mugla Museum provides further interest and features fossils excavated from the Kaklica Hill and Yatagan. More information about Oludeniz Museums. 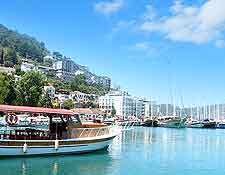 Many holiday makers rarely venture far from their hotel or sunlounger, perhaps taking a dip in the sea or a swim in their hotel's private pool. Others prefer to get out and about, and explore the outlying attractions, particularly those who have invested in a rental car for the duration of their vacation. Worth considering are day trips to the Saklikent Gorge and its canyon views, the town of Fethiye and its lively marina, and the ghost town of Kayakoy, where literally hundreds of abandoned houses remain, after the local Greeks were forced to leave the country in 1923. To the north-west and located in between Marmaris and Oludeniz, Dalaman is a sizeable town with amenities to match, and is conveniently near to some popular archaeological sites. Close by Dalaman is Dalyan, a small and charming village known for its mud baths, rock tombs, natural spa and Turtle Beach. More information about Oludeniz Attractions Nearby. 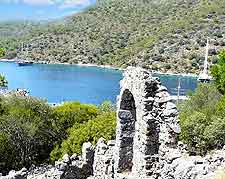 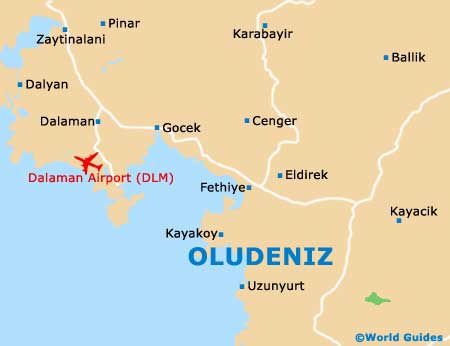