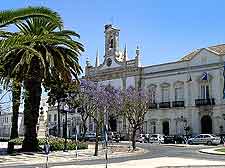 The multitude of landmarks in Faro come both old and new, ranging from the historical Arco da Vila gate to the very recently completed Algarve Stadium (Estadio Algarve), the latter of which plays host to all manner of seasonal events. Other sights of note in Faro include the University of the Algarve, the St. Francis Fountain and the Cathedral.

Dating back to the 13th century, Faro Cathedral is known locally as simply the 'Sé' and rather dominates the Largo da Sé, in the Cidade Velha district. The Sé Cathedral is an important city landmark and stands upon the site of an earlier mosque, which was in turn constructed upon a Roman forum. 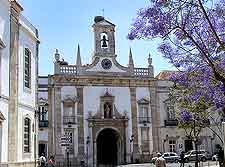 Address: Cidade Velha, Faro, Portugal, PT
The Arco da Vila serves as the city's 18th-century gateway and stands next to the local 'turismo' tourist centre. Marking the entrance to the historical Old City (Cidade Velha) area of Faro and offering a particularly medieval flavour to this part of the city, the Arco da Vila leads to the Rua do Municipio and is close to the Sé cathedral.
Open hours: daily - 24 hours
Admission: free 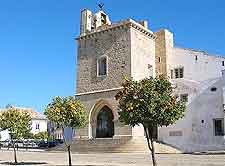 Address: Largo da Sé, Cidade Velha, Faro, Portugal, PT
Much of the Faro Cathedral was rebuilt and remodelled following the Portuguese earthquake of 1755, with the tower and two of the chapels remaining in their original form. The architecture clearly illustrates a mixture of styles, including an interesting mixture of Baroque, Gothic and Renaissance. A group of palaces stand close by, including the former bishop's palace, together with a line of orange trees.
Open hours: Monday to Saturday - 09:00 to 12:30, 13:30 to 17:00, Sunday mass at 10:00 and 12:00
Admission: charge 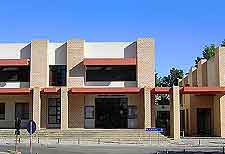 University of the Algarve (Universidade do Algarve / UAlg)

Address: Faro, Portugal, PT
One of the city's most notable educational landmarks, the University of the Algarve serves as a public Portuguese university, with student numbers now topping 10,000. The University of the Algarve was officially founded during the late 1970s and has grown greatly in size and stature ever since. Over the years, Faro's university has become known for its marine biology and oceanography, and is divided into various faculties and schools, and is spread between two related campuses.
Open hours: daily
Admission: free 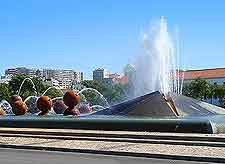 Address: Largo de Sao Francisco, Cidade Velha, Faro, Portugal, PT
The Largo de Sao Francisco is a rather impressive stone fountain and stands on the southern side of the Cidade Velha. For much of the year, the area surrounding this landmark serves as a large car park, although each year at the end of October, the area is completely cleared, ready to play host for the annual Feira de Santa Iria, which includes fairground rides, market stalls and live entertainment.
Open hours: daily - 24 hours
Admission: free 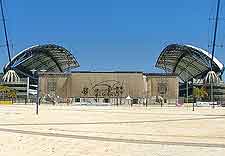 Address: Parque das Cidades (Cities' Park), Faro, Portugal, PT
The Algarve Stadium, or 'Estadio Algarve' as it is referred to by the Portuguese, is Faro's famous soccer stadium and was constructed at the turn of the millennium, in time for the 2004 European Football Championship. With a capacity of more than 30,000 spectators, the Estadio Algarve is regularly used not only for football matches and sporting events, but also for concerts, music festivals and even the Portugal Rally. The architecture is especially distinctive, with the two individual arched roofs rather resembling the sails of a ship.
Open hours: hours vary according to event
Admission: charge for events