The Algarve countryside is riddled with attractive beaches, small fishing villages and enticing coastal attractions, many of which area ideal for day trips. Most tourists choose to hire a car while visiting Albufeira, making it easy to take an afternoon excursion before returning to enjoy the local nightlife.

Paderne Castle is one of the most popular attractions in the area, and the towns of Lagos, Portimao and Silves are also notable tourist magnets. Many choose to visit the nearby city of Faro, which is within easy driving distance of Albufeira and serves as the capital of the Algarve.

Faro is situated roughly 45 km / 28 miles to the east of Albufeira. Fostering an authentic Portuguese atmosphere, despite the success of its seaside resort, Faro is packed with quality attractions. Visitors will enjoy walking through the historic quarter, exploring the quirky 'bone chapel' and digging into the booming night scene. The events calendar in Faro is extensive and many large summer concerts take place at the Algarve Stadium (Estadio Algarve) in the Parque das Cidades. Culture vultures will likely enjoy touring the Regional Museum of the Algarve (Museu Regional Do Algarve).

Address: Paderne, Albufeira, Portugal, PT
Paderne is just a few miles inland off of the A2 motorway, and its castle is nothing short of a national icon. The castle is depicted on the flag of Portugal and is a truly ancient structure that hasn't been lived in since the 14th century. Its roots are Moorish, but an important Christian hermitage lies within its walls. A water mill and bridge in the area date to medieval times.
Open hours: daily - 08:00 to 18:00
Admission: free

Address: Sagres, Portugal, PT
About 93 km / 58 miles to the west of Albufeira, Cape of St. Vincent (Cabo de Sao Vicente) can be reached in a one and a half hour' drive. High cliffs overlooking the sea host colonies of nesting peregrine falcons, storks, kites, and Bonelli's eagles. The lighthouse looming over the headland presides over one of the busiest shipping lanes in the world and was built in the mid-19th century, on the ruins of a 16th-century Franciscan convent.

Lagos is a charming 14th-century town with cobbled streets and rambling fortifications. The historic churches in the medieval town are part of the allure, such as the Igreja de Santo Antonio, but tourists come explicitly for the beaches and nightlife. Lagos is located approximately 55 km / 34 miles to the west of Albufeira and can be reached in under an hour by hire car. To the east, the vast Meia Praia beach offers water skiing, sailboarding and surfing. Other notable neighbouring beaches include the Batata, the Dona Ana and the Pinhao.

The major attraction in Silves is its castle (castelo), which is one of the best preserved Moorish fortresses in all of Portugal. Silves Castle dates as far back as the 8th century, being thoroughly restored in the early part of the 19th century. This beautiful and historic town has fewer facilities and after-hours options than its neighbours, so most people visit in a single day. Silves is to be found just 32 km / 20 miles north-west of Albufeira and can be reached in about 30 minutes. Further sights reside close to the castle, such as the 13th-century cathedral, the charming 16th-century Igreja Misericordia church, and the Museu de Arqueologia (Archaeological Museum).

Located approximately 39 km / 24 miles to the west of Albufeira and just past Lagoa, Portimao ranks amongst the Algarve's largest towns and is well known for its exceptional sailing conditions. Power-boating is another coastal attraction here and the Portuguese Grand Prix of the Sea is regularly staged in Portimao. Most day trippers will find themselves spending time on the beautiful Praia da Rocha (Rocky Beach), or shopping for holiday souvenirs along the Rua do Comercio and the Rua Vasco da Gama.

The municipality of Lagoa may only be relatively small in terms of overall size, but it is certainly big in appeal. Lagoa is to be found around 29 km / 18 miles to the west and this area is overflowing with beaches and heritage sites. Some of the best surrounding beaches include the Praia da Angrinha, the Praia de Carvoeiro, the Praia Grande, the Praia da Marinha and the Praia Nova. Of note, Lagoa is divided into the following six parishes - Carvoeiro, Estombar, Ferragudo, Lagoa, Parchal and Porches. 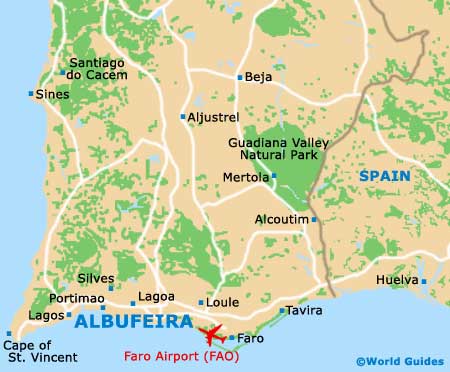