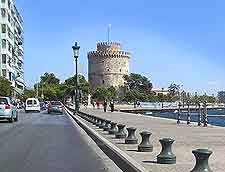 Located within northern Greece (Central Macedonia) and the second-biggest of all the Greek cities, after only Athens, Thessaloniki is often referred to as the country's cultural capital. Also known as 'Salonica', Thessaloniki is the perfect place to indulge yourself in all kinds of luxury and treats, with superb shopping, fine dining, a spirited nightlife, some quality museums, and plenty of concerts and events, especially during the summer season.

The are a number of sights which really do enhance the overall appearance of Thessaloniki, namely its historical White Tower, Byzantine city walls, traditional Greek architecture, and its pretty waterfront, which is lined with cafes and shops. For the latest in the way of tourism, Thessaloniki's tourist information centre is on hand and resides within the Makedonia passenger terminal of the port, next to the Ladadika district. 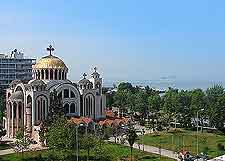 Although Thessaloniki may be an archaeological city with a number of ancient sites, it is also conveniently close to some exceptional beaches, which often features a good selection of water sports. Most beaches are just a short drive away, being clustered around the Thermaikos Gulf, with the most popular beaches including Angelochori, Aretsou, Galaxias, Nea Michaniona, Perea Beach and Platania, amongst others. More information about Thessaloniki Beaches. 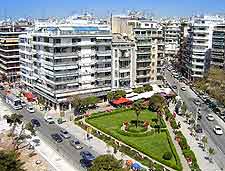 Apart from the beaches, there is lots for tourists to see and enjoy, all over Thessaloniki. The promenade of Nikis Avenue is especially appealing and lines the waterfront, being near to the bustling square of Plateia Eleftherias. Close by is the lively Plateia Aristotelous square, where there is always something of interest to enjoy. The northern side of central Thessaloniki is edged by the Ano Poli (Upper Town), and it is here which you will discover some of the city's oldest sights, including the 14th-century St. Nikolaos Orphanos Church. More information about Thessaloniki Tourist Attractions. 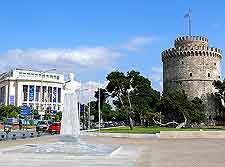 The skyline of Thessaloniki has changed greatly over the years, although is still graced by some important and historical landmarks, such as the very modern and important OTE TV Tower. Around the city, some of the most impressive sights include the Palace of Galerius and its Rotunda (Mausoleum), where you will find information about its history and beautiful frescoes. For a real taste of the past, pay a visit to the Ancient Roman Agora, which dates back more than 2,300 years, or to Thessaloniki's 'Little Palace' (Kyvernion), once a favourite haunt of the Greek monarchy. More information about Thessaloniki Landmarks and Monuments. 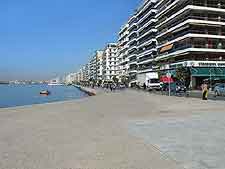 Many a holidaymaker is sad to leave Thessaloniki at the end of their holiday, although often savour the chance to explore this endearing part of Greece more thoroughly. A number of quality attractions are so close to Thessaloniki, that their allure is hard to resist. These include the beaches of the Halkidiki Peninsula, the views from Mount Olympus, the ancient mosaics of Pella, and the outstanding Royal Tombs of Vergina, the burial site for Macedonian kings from the past. More information about Thessaloniki Attractions Nearby. 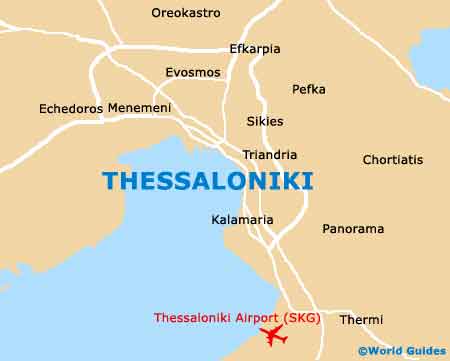