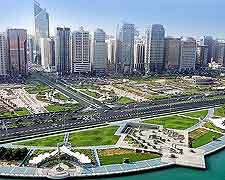 A relaxed and especially wealthy Arab city, Abu Dhabi is known for its considerable oil fortunes and is often compared to Dubai, although is noticeably more reserved and certainly doesn't target tourists in the same way. The capital of the UAE, Abu Dhabi is believed to be the richest city in existence and has recently completely revamped its scenic waterfront 'Corniche', where the extravagant Emirates Palace Hotel is hard to miss and takes opulence to another level.

The city of Abu Dhabi stands on an island within the Persian Gulf and is linked to mainland UAE by two long bridges, meaning that it is easy to access. Tourists arriving here will discover a modern skyline of glassy buildings, as well as a backdrop of mosques, stylish shopping centres, international hotel chains and tree-lined boulevards. For the very latest in tourist information, check out the Abu Dhabi Tourism Authority (ADTA) office on Al Salam Street.

At a cost of almost US$ 30 million, Abu Dhabi is trying hard to compete with the glitz of Dubai by building the Saadiyat Island. This 'Island of Happiness' is expected to become a major cultural centre with beaches, marinas, museums, parks and golf courses, although is not scheduled for absolute completion until 2018. 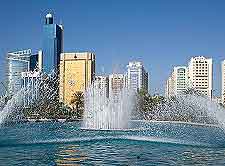 There are all kinds of sights and tourist attractions to see within Abu Dhabi, suiting all tastes and ages. Families will favour spending an afternoon exploring the animal attractions within the Al Ain Zoo or riding on the thrilling roller coasters at the Hili Fun City amusement park. Also popular is the Abu Dhabi Heritage Village, which offers a taster of how the city once appeared, with a reconstructed village setting, complete with desert tents. Don't miss the seducing aromas within the Old Souk (market), where bargaining is just part of the overall fun. More information about Abu Dhabi Tourist Attractions. 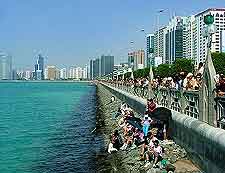 Much history is present within Abu Dhabi and the city is home to innumerable impressive sites, such as the White Fort (Qasr al-Hosn), which was once the official residence of many of the city's leaders. The Eastern Fort is another of the city's most prominent landmarks, as is the rather run-down Al Manhal Palace, which is just a short stroll from downtown Abu Dhabi and surrounded by a huge expanse of parkland. Close by, the Hatta Watchtower boasts commanding views from its elevated situation. More information about Abu Dhabi Landmarks and Monuments. 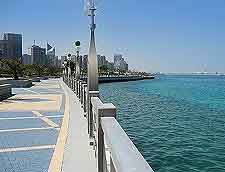 There is plenty of opportunity to learn about Abu Dhabi's past, with archaeological artefacts and information on display within the Al Ain Museum. For an insight on how the fortunes of the city were almost transformed overnight following the discovery of oil, the Petroleum Exhibition on the Corniche comes highly recommended. The region's Bateen Shipyard may also be of interest, along with the regular art exhibitions within the Cultural Foundation, which is located across from the Etisalat Building. Soon to come to Abu Dhabi are both the Guggenheim Museum and the Louvre Gallery, with the city's arts scene set to explode on the world's stage. More information about Abu Dhabi Museums and Abu Dhabi Art Galleries. 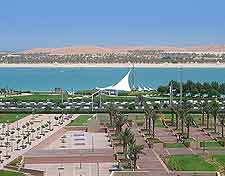 Apart from Abu Dhabi, there are actually six further emirates which combine to make up the United Arab Emirates (UAE). A number of these are particularly close by, with attractions ranging from the garden city of Al Ain, to the offshore island of Abu Al Abyad and the spectacular beachfront of Mina Jebel Ali, which offers the perfect excursion. However, it is the allure of Dubai that tempts may tourists holidaying in Abu Dhabi, and with Dubai being so nearby, a visit is simply a must, with highlights including giant man-made palm islands, luxurious hotel resorts, some of the world's tallest skyscrapers and the biggest shopping centres, and literally mile upon mile of white sandy beaches. More information about Abu Dhabi Attractions Nearby. 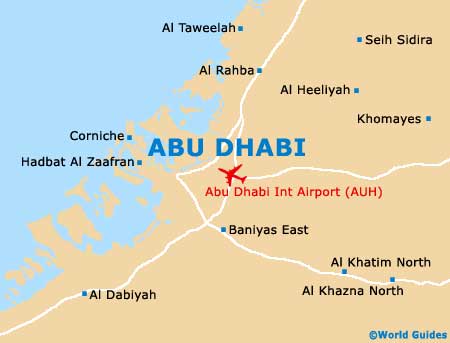