Ipoh Weather, When to Go and Climate Information

Set in the dramatic Kinta Valley amid limestone ranges and pristine jungles, Ipoh's climate is classic tropical rainforest, with very little temperature variation year-round. Rainfall is heavy at 2340 mm / 92 inches annually, and occurs all year round, with October and November its wettest months and February and June its driest. Average temperatures sit around 30°C / 86°F, only varying a few degrees throughout the year, and humidity is generally high at around 90 percent, increasing the 'feel' of the temperature to an occasional uncomfortably high level.

Cool relief can be obtained by a visit to the hill stations in the Cameron Highlands, with average temperatures around 22°C / 72°F necessitating a warm sweater in the evenings. Otherwise, it's rare that a day passes without some rainy weather, usually a short, sharp tropical rain burst - except in the monsoon season, when the heavens open and stay open for hours, depositing large amounts of rain, day and night.


Seasonal Climate Variations / When to Go

Very little seasonal variation in temperature occurs here during the year, making Ipoh a good all-year round destination for tourists. However, humidity is higher in the wetter months, affecting the heat index and climate. If outdoor activities are on the holiday agenda, it is best to avoid the wettest months, as roads in the peninsula's interior may be impassable due to flooding. Intense short downpours usually occur during the afternoon, so light summer clothes and an umbrella are useful, plus a sweater if visiting hill stations.

One problem, caused by forest fires and slash-and-burn agricultural practices in Malaysia and Indonesia, is known as the 'haze' and may cause difficulties for those who are sensitive to pollution. The phenomenon usually occurs in late summer and continues into early autumn, so it's best to avoid these months if pollution is a problem. Otherwise. it's a choice between getting very wet or very hot. 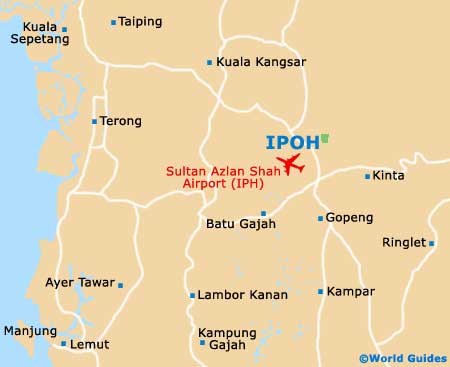