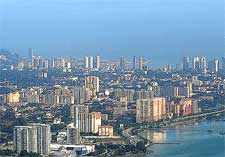 Prior to the arrival of the British, Georgetown had remained an outpost of the Sultanate of Kedah for centuries, an area of swamps and small fishing communities that had little to do with the rest of the peninsula.

Captain Francis Light, a representative of the British East India Company, changed all that in 1786 when he bought the island from the sultan before building Fort Cornwallis. This star-shaped embattlement, on the north-east of Penang island, remains in excellent condition to this day and is a major tourist attraction. Light immediately named the city after King George III in honour of the then ruling British monarch. In fact, it's one of several cities around the world bearing a name from this King.

He declared Georgetown a free port, which prompted its steady rise to prominence, even though Light himself died from malaria just eight years after founding the settlement. Immigrants soon began to flock here from countries such as India and China. The history of Georgetown during this period is one of fast growth and development, in which the port became the hub of a regional trading network that extended to the far corners of the British Empire.


The population had already reached some 12,000 people during the early years of the 19th century. The area between Pitt Street (now named Masjid Kapitan Keling Street), Malabar Street (now Chulia Street), Light Street and Beach Street all became the centre of the commercial district, as seen in the remaining colonial buildings, including the old Penang Secretariat. Later, the shipping district extended to Weld Quay and land was reclaimed to house the ever-growing number of warehouses, offices, banks and private businesses. Nearby St. George's Church, the oldest Anglican place of worship in South-East Asia, still stands today.

Amongst the very first banks to locate to Beach Street were the Chartered Bank, along with the Hong Kong and Shanghai Banking Corporation, which is now known as HSBC and still occupies the same building today.

Shipping companies, Chinese traders, a European-style emporium, and importers and exporters also moved in, creating a vibrant mixture of different cultures. This area became known as the High Street, selling all manner of luxury imported goods and prompting local administrators to install the first petroleum lamps in Penang, illuminating this section of Beach Street at night. It is a legacy that has endured until today, with Georgetown regularly voted as one of the most livable cities in Asia. 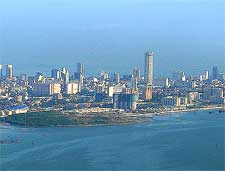 Following independence, the history of Georgetown became even more secure with the opening of the Penang Bridge to the mainland in 1985, a project first conceived in the early 1970s and which took three years to build. The lengthiest bridge in Malaysia, and vaguely modelled on the Golden Gate Bridge in San Francisco, it has helped Georgetown to grow as one of the biggest cities in the country. The bridge only closes for the Penang Bridge International Marathon, which has taken place every year since it was first opened. Runners replace vehicles on this iconic dual-carriageway bridge (the country's longest, at 13.5 km / 8.5 miles in length), which includes 8.4 km / 5.2 miles over water.

The unique architectural heritage and history of Georgetown was formally recognised in July 2008, when UNESCO made the inner city a World Heritage site alongside Malacca, a decision that guarantees the protection and upkeep of the many old buildings in this area.

Most recently, ambitious reclamation developments such as The Light, a suburb inspired by the Dubai model, have begun adding a 21st-century touch to Georgetown.