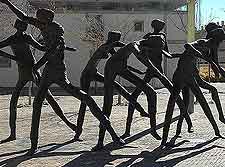 A skyline of skyscrapers are amongst the main landmarks in the centre of Johannesburg. Harking back to the city centre's former role as the hub of the city's business sector, Hillbrow Tower, Sentech Tower and Carlton Centre still stand sentinel.

Outside Johannesburg city centre, Constitution Hill is an unmissable city landmark, as is the township of Soweto - a monument to the troubled history of Johannesburg during the last century. The Soweto of today is a vibrant spot, with interesting restored traditional Sotho and Zulu villages, amongst other attractions. 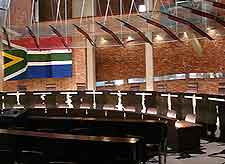 Address: Kotze Street, Johannesburg, South Africa, ZA
Tel: +27 011 381 3100
No sightseeing trip is complete without a trip to Johannesburg's Constitution Hill and Fort Complex. This important landmark is now home to the Constitutional Court, this is also the place where the infamous Number Four prison can be found. The prison's best-known former inhabitants include Nelson Mandela and Mahatma Gandhi. The Hill also attracts visitors to a variety of exhibitions and cultural events, particularly experimental performances that bring the site to life.
Open hours: Wednesday to Monday - 09:00 to 17:00
Admission: charge 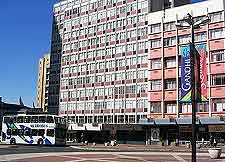 Address: Johannesburg, South Africa, ZA
This recently revived area of Johannesburg was originally built at the end of the 19th century and was known as Government Square. Today, thanks to the injection of millions of Rand, the square has been given a new name and a new look. At the heart of the city centre, visitors can stroll through pleasant shopping arcades or stop off for refreshments at one of the many restaurants or cafes. There is also a statue of Gandhi to admire.
Open hours: daily
Admission: free 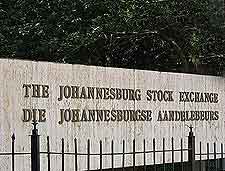 Address: Diagonal Street, Johannesburg, South Africa, ZA
A visit to a stock exchange may not seem the obvious choice for a sightseeing trip. It has to be said, though, that Johannesburg's Stock Exchange building makes for an astonishing sight. Covered entirely in glass, it certainly stands out from its much smaller, more ordinary, neighbours. Whilst the building is no longer used as a stock exchange and is closed to the public, it is still worth a look as you pass through the city.
Open hours: daily (exterior only, closed to the public)
Admission: free 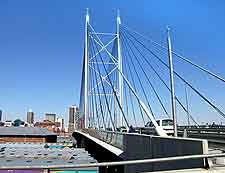 Address: Johannesburg, South Africa, ZA
The statistics for Johannesburg's latest bridge, named after Nelson Mandela and opened on his 85th birthday, are impressive. It took two years to make and cost 38 million Rand to build this famous local landmark. Measuring 284 metres / 932 feet in length, some 1,000 tonnes of structural steel were used in its construction. The bridge links Braamfontein to Newtown, and is set to become the central landmark of a newly revived Johannesburg.
Open hours: daily
Admission: free 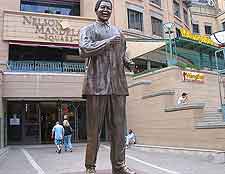 Address: Sandton, Johannesburg, South Africa, ZA
A bronze statue of Nelson Mandela at the centre of this square watches over visitors and locals alike as they enjoy its many shops, trendy cafes and restaurants. 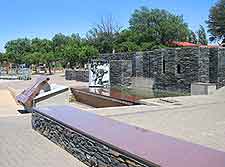 Address: Soweto, Johannesburg, South Africa, ZA
A tour of Soweto, the city's most infamous township, is a chance to really experience the city and find out about the townships and the role they played in the historic freedom struggles. Nelson Mandela has a home here, as does Archibishop Tutu. There are plenty of ordinary schools, squares and memorials to be seen, as well as the traditional Soweto Shebeen. An organised tour is the safest and best way to see the area.
Open hours: daily
Admission: charge for tour

Address: Rissik Street, Johannesburg, South Africa, ZA
Johannesburg has relatively few old buildings. The former post office, built at the end of the 19th century, is one of them. The other is the City Hall. Built in the Neo-Renaissance style during the early 20th century, City Hall is still home to a few municipal offices. Both historic buildings are conveniently located on the meeting point of Rissik Street and Market Street.
Open hours: daily
Admission: free