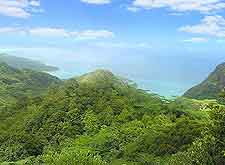 As is the case for many African countries, the Seychelles is experiencing the pressure of economic growth on its natural environment. A number of national parks have been set up in the Seychelles, such as the spreading Morne Seychellois, along with special reserves, including the one located on Cousin Island.

The admirable conservation efforts of the Seychelles have been ongoing for many years, with work over the last few decades really stepping up to meet the challenge. In fact, more than 40 percent of the overall land mass has now been designated as national parks, ensuring that the huge selection of indigenous flora (more than 250 native plant species) and fauna will survive for future generations to enjoy. 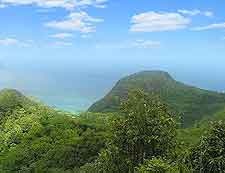 Address: Mahé, Seychelles, SC, Africa
Situated on the northern side of Mahé is the Morne Seychellois National Park, being directly to the west of Victoria and sandwiched by Port Launay and Bel Ombre. The Morne Seychellois park provides the perfect alternative to the beaches and is one of the island's biggest interior attractions, covering approximately 20 percent of Mahé and made up of a mixture of mangroves, lush tropical jungles and tall mountains. The highest mountain is the namesake Morne Seychellois, which measures in at a little more than 900 metres / 2,950 feet in height, making it the tallest in the entire archipelago. Guided walks are the best way to really see what is on offer here, although there are an array of easy to follow hiking trails available - Danzil to Anse Major, the Tea Factory to Morne Blanc, and those around the Trois Freres (Three Brothers) cliffs, towering above Victoria. Highly recommended is the Copolia trail, which is an easy jungle pathway starting at Chemin Foret Noire and boasting some breathtaking vantage points across Victoria and Sainte Anne along its route.
Open hours: daily
Admission: free 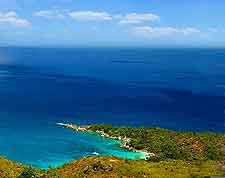 Address: Aride Island, Seychelles, SC, Africa
Tel: +248 04 32 16 00
Amongst the most northerly of the granite islands, Aride's contribution to conservation in the Seychelles is unbeatable. The reserve is home to one of the most significant sea bird populations in the Indian Ocean, with over a million sea birds nesting here, including the likes of the sooty tern and the tropical shearwater. This tiny island is also covered in scented flowers and native woodland, making it the ideal habitat for skink and gecko lizards, as well as marine turtles. The island is administered by the Island Conservation Society in the Seychelles. It's worth noting that Aride can close from May to September if strong winds prevent boats from landing.
Open hours: Monday to Friday - arrival by 10:00 recommended, Saturday and Sunday - by prior booking
Admission: charge (landing fee) 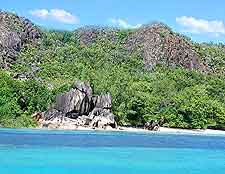 Address: Curieuse Island, Seychelles, SC, Africa
Tel: +248 04 22 51 15
Just a short distance to the north-east of Praslin is the Curieuse Marine National Park, which encompasses the island of Curieuse and its surrounding waters. Whilst the island itself is relatively tiny, it is home to an extraordinary number of indigenous plants - including the rare Coco de Mer palms, as well as a plethora of animals. On the island is a sizeable population of Aldabra giant tortoises, roughly have of which live a life of luxury within the Ranger's Station. Southerly Curieuse contains a mangrove swamp, which can be crossed by a raised walkway.
Open hours: daily
Admission: charge 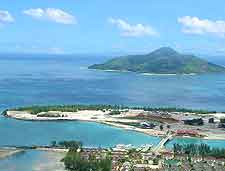 Address: Near Victoria, Mahé, Seychelles, SC, Africa
Situated some 5 km / 3 miles from Victoria, this was the first marine park to be set up in the Seychelles and, indeed, in the South Western Indian Ocean. The Sainte Anne Marine National Park extends over six islands (Cerf, Ile Cachée, Long, Moyenne, Round and Sainte Anne), with the main island of Sainte Anne acting as the centre for administration. The most notable inhabitants are the green turtles, which regularly come here to feed on the surrounding sea grass meadows. One island, Ile Cachée, remains uninhabited.
Open hours: daily
Admission: free 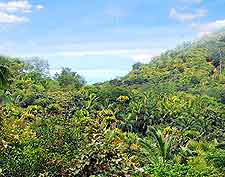 Address: Praslin, Seychelles, SC, Africa
Tel: +248 04 32 17 35
This World Heritage Site also happens to be one of the most popular tourist destinations in the Seychelles. The Vallée de Mai Nature Reserve is home to a prehistoric forest and, most notably, a vast number of giant Coco de Mer palms. These exotic trees have a canopy which can reach up to 30 metres / 98 feet in height, and have seeds which can weigh as much as 20 kg / 45 lbs in weight. The reserve is great for walking and for admiring the panoramic views. Onsite is also a souvenir shop, where snacks can be purchased.
Open hours: daily - 08:00 to 17:30
Admission: charge, children aged under 12 years old are free 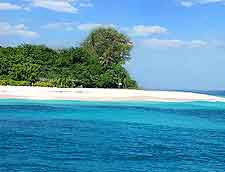 Address: Cousin Island, Seychelles, SC, Africa
Tel: +248 04 60 11 00
Cousin Island's nature reserve, run by Nature Seychelles, holds a very special place in the history of conservation - it was amongst the earliest island reserves ever to be created. On the island are Hawksbill turtles, along with a myriad of other rare animal and bird species. Cousin Island has also gained a reputation for being home to the densest lizard population in the world. Visitors should also note the huge flocks of sea birds who choose the island as their nesting ground. The reserve attracts around 10,000 visitors each year, although it should be noted that access is limited to weekday mornings only.
Open hours: Monday to Friday - 10:00 to 12:00
Admission: charge (landing fee) 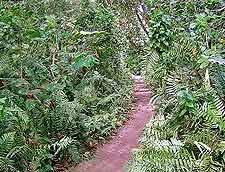 Address: La Digue, Seychelles, SC, Africa
Tel: +248 04 78 31 14
The island of La Digue is where you will find the Veuve Reserve, the only place in the world where the black paradise flycatcher can be seen. This endangered long-tailed bird lives here in a healthy population of about 300 and is usually fairly easy to find in the forests, living in the tall bodanmyen and takamaka trees. If you want to be guaranteed to see the flycatcher, your safest bet is to join the ranger on a tour. Walking trails, terrapins, fruit bats and many other attractions await visitors, along with information boards and a useful visitors centre (open Monday to Friday - 08:00 to 12:00, 13:00 to 16:00).
Open hours: daily
Admission: free 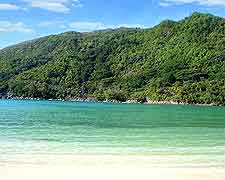 Address: Port Launay, Mahé, Seychelles, SC, Africa
Tel: +248 04 22 51 15
The protected waters of the Launay Marine National Park offer a sanctuary for sea life on the north-western coast of Mahé, just below the Baie Ternay Marine National Park and between Port Glaud and Cap Ternay. Port Launay is also a paradise for visitors, thanks to its many beautiful and secluded beaches, where shade is often provided by takamaka trees. The scuba diving and snorkelling conditions here are, as you would expect, nothing short of superb.
Open hours: daily
Admission: charge, children aged under 12 years old are free 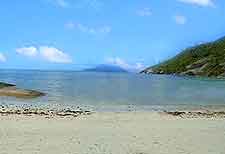 Address: Baie Ternay, Mahé, Seychelles, SC, Africa
The coastal Baie Ternay Marine National Park sits next to the Baie Beau Vallon, where it is nestled between hills and is a good place to spot passing whale sharks between August and October. These whale sharks regularly arrive at this time of the year to feed on the lush plankton known to accumulate here, particularly around the lighthouse. The large and spacious white sandy beaches of Baie Ternay are another good reason to visit this part of Mahé.
Open hours: daily
Admission: charge, children aged under 12 years old are free