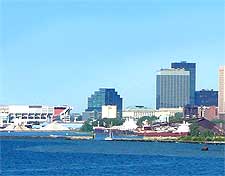 Location is everything when it comes to establishing a city, and Cleveland pulled off a windfall by building itself alongside Lake Erie.

Railroads and grand canal networks put the young city right in the path of American trade and transport history, elevating Cleveland to one of the nation's leading centers of manufacturing and commerce. Though it's fallen from grace rather hard in modern times, the city still has much promise waiting within its wings.

After the American Revolutionary War came to an end, land grants were handed out to many corporations as an incentive to expand the young nation's settlements westward. The Connecticut Land Company was one such benefactor, and their holdings at the mouth of the Cuyahoga River proved to be a good site to build a city. General Moses Cleaveland surveyed the city and laid it out based around 'Public Square', which is still the heart of Cleveland's history today. 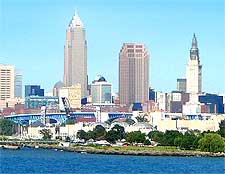 The factor that really propelled Cleveland into the history books was its location where the Cuyahoga River pours into Lake Erie, one of the Great Lakes. Once the Ohio and Erie Canal was completed in 1832, this young town was connected to the mighty Ohio River, which was the main trade and transport route to all the major river ports south. The railroad arrived soon after, giving Cleveland even better access to the rest of industrial America and establishing its history as one of the principal ports of the Great Lakes.

The years of the American Civil War brought a massive economic boom to Cleveland, quickly turning the city into a rising industrial powerhouse. Besides transporting goods around the American North, the city began manufacturing naval boats and essential war components, along with textiles and tobacco. By the end of the war, Cleveland was one of America's top five oil-refining centers.

Following the Civil War, Cleveland was one of the leading manufacturing cities in America. The wealth in this era of Cleveland history is evident today among the mansions of Millionaire's Row and monumental homes like the Southworth House, all built before the turn of the 20th century. 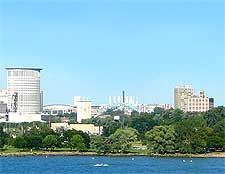 Cleveland stayed on top for decades, expanding its industry during the 1920s and attracting a vibrant urban scene with professional sports teams, popular jazz musicians and an influx of immigrants. Grand buildings like the Terminal Tower, the second-tallest structure in the world until 1964, kept the city at the top of the American urban scene.

The Great Depression hit hard, but even as the city slowly worked its way back, other crises kept it down. The 1960s ushered in a new era of racial violence, culminating with the Hough Riots in 1966. A series of political comedies and environmental disasters went on to damage Cleveland's image as a golden city for good.

The 1980s saw things turn around with a new mayor and a spot of good fortune. The dire economic state of Cleveland was reversed and urban revitalization projects like the Gateway Complex, the Sohio Building and Key Tower began. Cleveland was once again named an All-American city for several consecutive years, and while today it continues to find its path forward, there is still a lot of potential for this Great Lakes city.