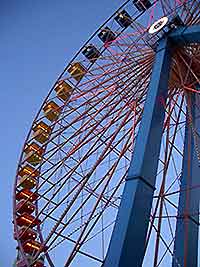 During the course of the year, the city of Cleveland holds several lively annual events, celebrating the city's international influences through food, music and art. There are also various film festivals and family themed events to keep all ages entertained.

Many of the biggest events in Cleveland are staged at the downtown Playhouse Square Center on East 14th Street, which is actually the USA's second-biggest theater complex and dates from the early years of the 1920s. In the 1980s, these theaters were successfully renovated at the cost of more than $40 million and now frequently stage touring shows from Broadway.

Based on the eastern side of the city and in the neighborhood of Fairfax, Karamu House is another notable theater, while within the University Circle area, Severance Hall is where you will need to go to catch the world-renowned Cleveland Orchestra in action. Many festivals and other concerts tend to use Severance Hall as a venue as well, including the Tri-C JazzFest each April, which also sees gigs staged at the Playhouse Square Center (Allen Theater and Ohio Theater), along with the Doubletree Hotel, the East Cleveland Public Library, the House of Blues, the Rock and Roll Hall of Fame and Museum, the Tower City Center and the Tri-C Metro Campus Auditorium, amongst other venues.