The small desert city of Palm Springs resides on the southern side of California, part-way between Anaheim and the Arizona state border, and within the Coachella Valley.

Palm Springs is to be found in Riverside County and is within reasonable driving distance of numerous tourist cities, such as Los Angeles and San Diego, both of which are in the region of three hours away by road. Various mountains surround the city, such as those of San Bernardino (north) and Santa Rosa (south), which offer much shelter and provide imposing backdrops.

There are roughly 30 different neighborhoods within Palm Springs, although for tourists in the city, maps will show that much of the interest resides within the downtown district. Here you will find the Palm Springs Convention Center, the Ruth Hardy Park, the Spa Resort Casino and the Palm Springs Stadium, which stands on the corner of East Ramon Road and South Sunrise Way, and is used to stage important baseball games to crowds of up to 5,000 spectators.

The desert towns and cities of the Coachella Valley are easy to reach, thanks to the presence of Highway US-111 and the Christopher Columbus Transcontinental Highway (Interstate I-10), which is also known as the Sonny Bono Memorial Freeway.

Various spreading parks and preserves dominate the surrounding landscape. The Joshua Tree National Park lies to the east of Palm Springs, the Mount San Jacinto State Park to the west, the Anza-Borrego Desert State Wilderness to the south, and the San Bernardino National Forest to the northwest. 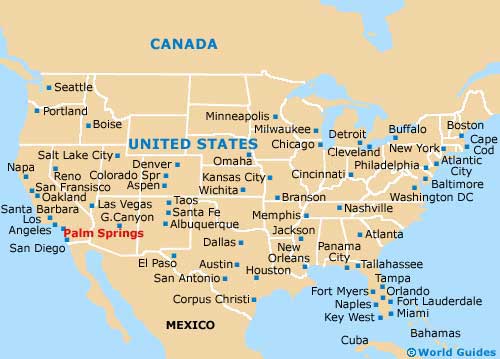 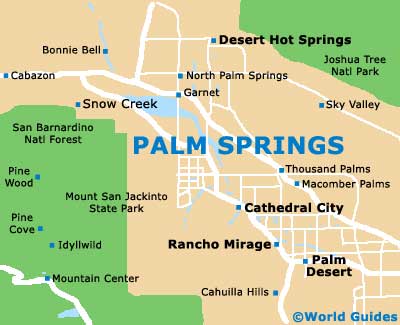