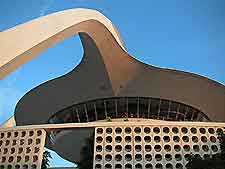 Los Angeles is home to a major international airport, which is conveniently close to Beverly Hills, Lawndale, Redondo Beach, Santa Monica and Torrance. Los Angeles International Airport is one of California's premier air facilities and the various ground transport options provide efficient methods of transportation to and from nearby Anaheim.

This airport is one of California's oldest and most important, and began its life way back in the late 1920s, when the City Council obtained a large chunk of agricultural land. Soon after it became an official municipal airfield, with the following years seeing the building of new runways and terminals. Today, this facility frequently ranks just outside of America's busiest top five, boasting more than 600,000 flights each year and over one million passengers every single week.

Address: 1 World Way / Pacific Coast Highway, Los Angeles, California 90045, USA
Telephone: +1 310 646 5252
Los Angeles International Airport can be found just 15 miles / 24 km to the southwest of the city center and around 36 miles / 58 km west of downtown Anaheim, serving many major international and domestic flights. Useful points of reference close by include the Dockweiler Beach State Park and Marina Del Rey, as well as the suburbs of Hawthorne and Inglewood.

LAX Airport houses nine individual terminals, with courtesy shuttle buses connecting each of these buildings. These terminals are numbered one to eight, with the ninth being named the Tom Bradley International Terminal (TBIT). In total there are more than 110 numbered gates.

Renting a car is often a preferred method and the routes leading to both downtown Los Angeles and nearby Anaheim come with clear signposts. By car, the journey into Anaheim lasts around 45 minutes and major roads en route include the San Diego Freeway (I-405), the Garden Grove Freeway and Convention Way. If you are driving into Los Angeles, you will most probably take Interstate I-105, before joining the 1-110 (South Harbor Freeway).

Los Angeles Airport is home to numerous regular bus and shuttle services. The LAX FlyAway is a convenient direct round-trip service, collecting and dropping-off passengers at Irvine Station, Union Station, Van Nuys and Westwood. Scheduled buses are also to hand, being operated by firms such as Airport Bus of Bakersfield, Grayline Coach USA and Santa Barbara Airbus. Those headed into Anaheim may like to use Shuttle One, with buses running to Garden Grove, Knott's Berry Farm and the famous Disneyland theme park - journey times are in the region of one hour.

Taxi ranks are located outside of each terminal, being clearly indicated by yellow 'Taxi' signs. Offering a convenient way to reach Los Angeles city center, cabs will also travel into Anaheim, although this can prove expensive. Each taxi should contain a ticket listing typical fares to the most popular destinations. Of note, only authorized vehicles should be used and these always display an official seal from the City of Los Angeles Department of Transportation.

Limousines are available and offer a particularly luxurious way to reach your chosen destination. Limos are often not as expensive as you might think, and so it makes sense to check the current rates before deciding whether or not to use this service.