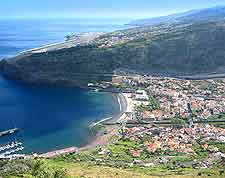 The Portuguese island of Madeira really is an idyllic spot and the perfect place for a relaxing holiday. Located just over 800 km / 500 miles to the far south-west of mainland Portugal, Madeira is surrounded by the Atlantic Ocean and part of a small volcanic archipelago.

Funchal serves as the island's capital city and lies on the southerly coastline, being surrounded by popular beaches and resorts. Although Madeira has become well known for its senior holiday makers, who come here to enjoy the plentiful year-round sunshine, the island certainly offers an enviable younger tourism vibe. There are many stunning hiking trails along the cliff tops, where you may even be able to spot a sperm whale swimming close to the shore.

Once you've arrived on Madeira, you won't find it hard to find sources of up-to-the-minute tourist information, particularly if your are staying at Funchal, or in or around the resort towns of Boaventura, Machico, Ribeira Brava, Santa Cruz, Santana and Sao Jorge. The majority of hotels will provide a selection of leaflets and attractions, together with shops and travel agencies. 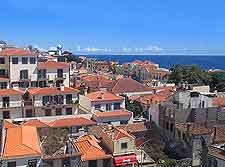 Whatever your age, the island of Madeira will likely suit your holiday requirements. Those who can drag themselves away from the Madeira beaches and are looking to explore some of the island's most popular attractions may like to visit the appealing villages of Camara de Lobos, Curral das Freiras, Pico do Arieiro, Porto Moniz and Ribeiro Frio, the latter of which enjoys a secluded setting, surrounded by woodland and mountains. Ribeira Brava and Santa Cruz are two particularly lively island resorts and are home to a selection of beaches and related attractions, such as pools, esplanades and vantage points. Much of the island's action understandably takes place in its capital of Funchal, where the biggest selection of hotels and restaurants are located. Many tourist attractions in Funchal are based around the Municipal Square (Praca do Municipio) and off the adjoining alleyways. More information about Madeira Tourist Attractions. 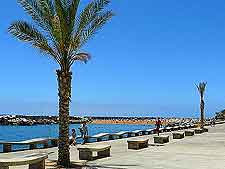 The landscape of the island varies greatly, with countless impressive man-made landmarks overlooking the coastline, such as mountain churches, modern high-rise hotels and historical levadas (water channels). Tourists will also find an array of natural sights spread around Madeira, such as the awesome Cabo Girao ocean cliff, which is amongst the world's tallest of its kind. Other landmarks of note include the Eira do Serrado balcony - where the views across the 'Grande Curral' volcanic crater are superb, the atmospheric Sao Vicente Caves at Pe de Passo, and the Quinta do Palheiro Ferreiro estate - which comes complete with a stately home and landscaped gardens. More information about Madeira Landmarks and Monuments. 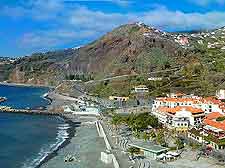 As you would expect, the best selection of museums on Madeira are to be found within Funchal, where a number of different subject matters are covered. These include the 'Casa da Luz' Electricity Museum (Museu de Electricidade), the Museum of Natural History (Museu de História Natural), and the Museum of the Madeira Wine Institute (Instituto do Vinho da Madeira). For modern Madeiran and Portuguese art, head to the Museum of Contemporary Art (Fortaleza de Sao Tiago) in Funchal, while for something a little more traditional, the exhibits and information at the Museum of Sacred Art of Funchal (Museu de Arte Sacra do Funchal) are likely to appeal to all ages. More information about Madeira Museums and Madeira Art Galleries. 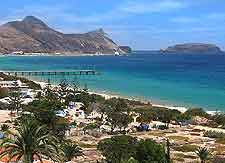 Simply travelling from one side of the island to the other can often be something a mini-excursion. However, if you are feeling more adventurous, then cruises regularly depart from Funchal harbour and head to the neighbouring islands that are part of the Autonomous Region of Madeira, such as the Desertas Islands, Porto Santo Island and the Savage Islands (Selvagens Islands). A little further afield are the Canary Islands of Fuerteventura, Gran Canaria, Lanzarote and Tenerife, where a selection of stunning beaches await tourists. More information about Madeira Attractions Nearby.