Getting Around, Rhodes Travel, Transport and Car Rental 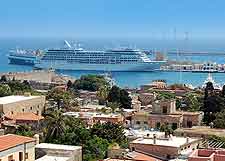 Getting around the island of Rhodes is fairly straightforward, with a number of different transport options plying the network of roads. Buses are the only form of public transport currently operating on the island and provide a cheap and easy way to travel to your destination. There are actually two separate bus terminals within Rhodes Town, offering regular services to most beaches and resorts.

Taxi transport on Rhodes is also a very popular way to travel around and taxis are easy to recognise, being dark blue in colour, with bright white roofs. Many visitors choose to use taxis to travel to and from Rhodes Diagoras Airport, simply for the sheer ease and convenience, although car rental suits an increasing number of holiday makers. And if you have the time, you can always take a leisurely cruise to another island for the day. 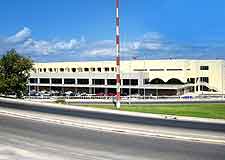 Address: Paradissi, 851 06, Rhodes, Greece
Tel: +30 22410 88700
There are actually no less than three separate airports currently operating on the island of Rhodes, although only one of these serves the public, Diagoras International Airport. This air facility is actually amongst the biggest in the whole of Greece and is the main entry and exit point for most holiday makers, with the number of summer charter flights now approaching 200 per day. Diagoras Airport is situated next to Paradisi village and is conveniently close to Rhodes Town, which lies some 16 km / 10 miles to the north-east, with bus transport on hand to and from this capital (at least 20 buses per day). Many of the airlines fly to the main Greek islands, such are Crete (Heraklion), Kos and Santorini, along with Greek cities, such as Athens and Thessaloniki (Aegean Airlines and Olympic Airlines). Notable airlines linking Rhodes with the UK include easyJet, Thomas Cook and XL Airways 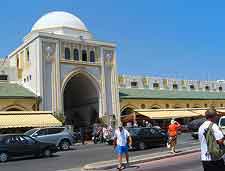 The network of roads around the island is modern and often asphalt or paved, offering a relatively easy way to find your way around and travel between attractions, should you choose to hire a car during your stay. However, the roads on the southern side of the island can be only one step up from gravel tracks. There are a number of car and motorcycle transport rental outlets situated within Rhodes Town itself, where the huge competition generally means that the prices remain low. Cars may also be rented through most hotels and at Diagoras Airport. The main stretches link Rhodes Town with Faliraki, Kamiros and Lindos, amongst other resorts. 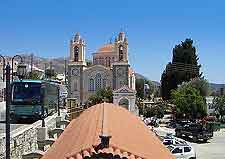 The east side bus terminal in Rhodes Town is located on the Plateia Rimini and numerous buses travel each day to Faliraki, Gennadi, Kolymbia, Lardos, Lindos and Psinthos. Sited alongside the New Market, the town's west side bus terminal offers transport to Ancient Kamiros, Embonas, Kalithea Thermi, Koskinou, Monolithos, Salakos and Skala Kamirou. Bus travel timetables can be picked up from the Rhodes EOT tourist information office. 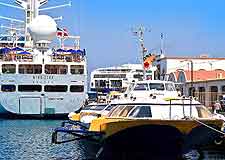 The island features no less than five ports, three of which reside within Rhodes Town. The other two ports can be found on the western shoreline, next to Kamiros, and on the eastern side of Rhodes, close to Lardos. A huge list of domestic ferries travel to and from the islands around the Dodecanese, with ferry transport from Rhodes linking destinations such as Agios Nikolaos (12 hours), Amorgos (6 hours), Chios (13 hours), Heraklion (14 hours), Kalymnos (3 to 5 hours), Karpathos (3 to 5 hours), Kos (3 1/2 hours), Leros (4 1/2 hours), Patmos (7 hours), Piraeus (12 to 18 hours), Samos (9 1/2 hours), Sitia (10 hours) and Syros (9 to 11 hours).