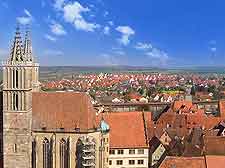 Rothenburg ob der Tauber is a charming small Bavarian hilltop town, with its beautifully preserved medieval old quarter drawing high tourist numbers annually from all over the world. The old quarter is a unique holiday destination, giving visitors the feeling of stepping back into the Middle Ages, with its tiny cobbled streets, half-timbered houses, massive towers and views across the river valley. It really does seem that nothing has changed here for over 300 years, thanks to strict conservation orders. Movie buffs may well recognise some of the historic buildings in the town centre, since this spot was used as a film location for the famous 1968 musical, Chitty Chitty Bang Bang.

One of the most important tourist destinations in the Bavaria area of Germany, the town's medieval Altstadt (Old Town) nestles inside complete and undamaged 14th-century walls. Tourist information is easily found at the Rothenburg ob der Tauber tourism centre (the City Councillors' Tavern) on the main square (Marktplatz), which lies roughly in between the Kapellenplatz and the Kirchplatz, off the Obere Schmiedgasse. 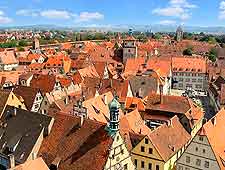 The tremendous character of Rothenburg ob der Tauber is a huge part of its appeal, and the attractions of the Altstadt are just a ten-minute walk to the west of the train station (Hauptbahnhof), via the Ansbacher Strasse. For shopping, the Schmiedgasse is a good place to start, while for sightseeing, take a walk around the ancient town walls and climb the eastern tower (Roderturm) for some great views. The Gothic-style Town Hall (Rathaus) also features a tall tower and some excellent panoramas of the town below. With origins dating back nearly 1,000 years, Rothenburg Castle (Toppler Castle) is a must-see and enjoys an elevated position overlooking the town below, being quite hard to miss. More information about Rothenburg ob der Tauber Tourist Attractions. 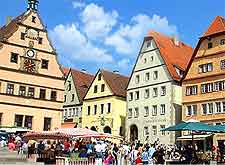 If you are on holiday in Bavaria and wishing to see the main landmarks of Rothenburg ob der Tauber, then a stroll around the centrally located Marktplatz is a good place to start a tour of the Old Town, heading past the picture-perfect Plonlein road fork. Close to the Marktplatz is the Master Builder's House, which dates from the end of the 16th century and boasts detailed wooden carvings. Just off the neighbouring Klostergasse is the Church of St. Jacob (Jakobskirche), which today functions as something of a notable pilgrimage site, with its ornate altar piece believed to contain a drop of Christ's blood. Further churches of local importance include both the St. Wolfgang Fortified Church and the Franciscan Church (Franziskanerkirche). Just a short distance outside of Rothenburg ob der Tauber is the rather unusual medieval Double Bridge (Doppelbrucke), which offers the perfect photo opportunity. More information about Rothenburg ob der Tauber Landmarks and Monuments. 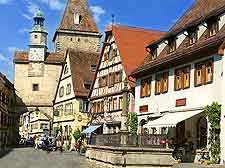 Although Rothenburg ob der Tauber may simply be a small German town, with a population of just 12,000 people, there is a surprising concentration of museums and cultural attractions awaiting visitors. Some of the best include the Imperial City Museum (Reichsstadmuseum) and its wealth of regional archaeological gems and related information, and the Medieval Crime and Punishment Museum (Mittelalterliches Kriminalmuseum), where some rather gruesome instruments of punishment and torture are displayed within the 14th-century residence of the Knights of St. John of Jerusalem. Located on the Alte Stadtgraben is the Old Rothenburg Tradesman's House (Alt-Rothenburger Handwerkerhaus), a late-13th century timber-framed house offering an insight into life in Bavaria in days gone by. For a taster of German art, the Gallery John (Galerie John) on the Hernngasse is a good bet and is conveniently close to the German Christmas Museum (Deutsches Weihnachtsmuseum), suiting those interested in learning the origins of today's Yuletide celebrations. More information about Rothenburg ob der Tauber Museums. 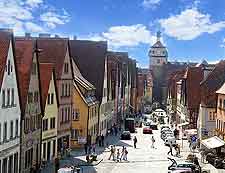 Bavaria contains a number of interesting and appealing German towns and cities, and those tourists who have chosen to hire a car for the duration of their holiday may like to plan a few day trips and excursions. By road, Nuremberg can be reached in approximately an hour and comes with an Old Quarter, a castle and a national museum, as well as endless shopping and dining. A similar distance away is the historical town of Wurzburg, where the Franconian wine industry has brought much prosperity to the region. To the south, Dinkelsbuhl comes with fortified walls an a huge Gothic church - the Munster St. Georg. Further medieval character resides within the neighbouring town of Nordlingen, while a drive along a section of the world-famous Romantic Road is a real must. More information about Rothenburg ob der Tauber Attractions Nearby. 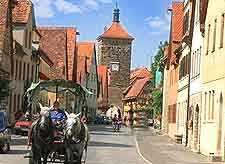 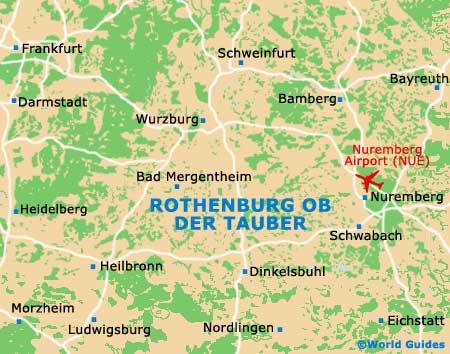