The major Malaysian city of Kuching lies on the Sarawak River in the province of the same name and has a unique history. It is perhaps the only region in the world to have been ruled as a personal kingdom by a British adventurer and his descendants.

Nowadays, the city is a popular visitor destination for its museums, unique historical sites and exotic atmosphere, complete with street markets, nearby national parks and plentiful statues of cats.

For many hundreds of years, the South China Sea shores of northern Borneo, now part of Malaysia, remained undiscovered as the home of the local Malay, Bidayuh, Iban and Orang Ulu tribes sustained by hunting and fishing. The region of which Kuching is now the capital city has a modern history of just under 200 years, prior to which it was under the control of the Sultanate of Brunei. 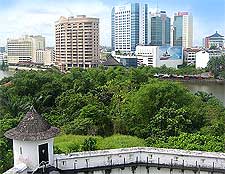 Formerly a peaceful, remote region with just a few coastal settlements, the Kuching area came under the tyrannical rule of the Brunei Sultanate and by 1836 was being challenged by rebel groups in the region. Unable to quell the revolts, the Sultan sent a young advisor with the British East India Company, James Brooke, to restore order. As a reward for his success, the Sultan granted the young Briton the title of Rajah of this large area of land in 1841.

Having founded Kuching just upcountry on the river's estuary, Brooke found himself under tribal attack after he banned headhunting and piracy, but this did not deter him and he successfully expanded his territory into a larger area than Brunei itself! Brooke became known as the 'White Rajah', and the United States and Britain had both recognised his holdings as a sovereign state by 1854. When Brooke died, his nephew took over his crown, followed by a third generation of the Brooke family, who finally abdicated in 1946. 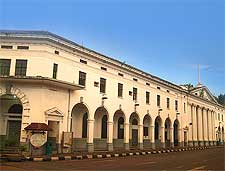 Occupying a strategic position due to its proximity to a crucial Dutch airport, and also only roughly 565 km / 350 miles from Singapore, Kuching became a hub for platoons of the Indian Army early in WWII.

However, the town surrendered to Japanese invaders at the end of 1941 and was under Japanese control until the end of the war, with a civilian internee and prisoner of war camp erected some 5 km / 3 miles from the city centre. 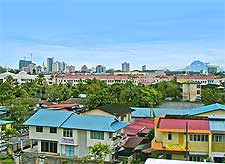 Having decided the time for personal kingdoms had ended, the third White Rajah, Sir Charles Vyner Brooke, gifted Sarawak and Kuching to Britain in 1946, ending an extraordinary chapter in the history of Kuching. A British Colonial government ruled until 1963, when the state joined with Malaya, the rest of northern Borneo and Singapore, in forming Malaysia. Subsequently, Kuching became the scene of massive development and received its city incorporation in 1988.

As for the cats, 'kucing' (without an 'h') literally means 'cat' in Malay, and the city was named after the feline-inspired Kuching River on which it sits. Today cats are proudly displayed throughout the city, most notably as large sculptures.