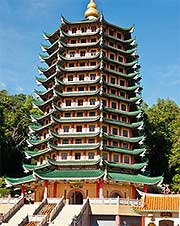 One of Malaysia's major tourism destinations and the gateway to the mysterious island of Borneo, Kota Kinabalu is the Sabah state capital and lies alongside the South China Sea, overlooked by soaring Mount Kinabalu, located just over 80 km / 50 miles away.

The city is also a hub for commerce and industry, and is one of the country's fastest growing conurbations. Kota Kinabalu's modern history is one of revolt, rebellion and Japanese occupation during WWII, resulting in frequent redevelopment and its present-day appearance as a relatively new city.

Inhabited by ethnic tribes over several millennia, Borneo's first colonial ruler was the Sultan of Brunei, whose fleet arrived in 1521. The island passed to the Sultanate of Sulu in 1704. The British East India Company gained a foothold in the territory in 1763, through a treaty with the Sulu Sultan, and reinforced their hold with control over most of Sabah state and the northern part of Borneo in 1878. 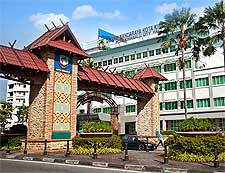 During the last 20 years of the 19th century, the British North Borneo Chartered Company began a programme of settlement across North Borneo, thus beginning its British colonial history.

The first settlement was soon destroyed by the Bajau rebel Mat Salleh (officially named Datu Muhammad Salleh), with its replacement sited in the fishing village of Api Api. This was renamed Jesselton after the head of the British North Borneo Chartered Company, Sir Charles James Jessel. The new site was easier to defend and was conveniently close to the North Borneo railway, whilst also boasting a protected deepwater harbour suitable for development. The present-day city of Kota Kinabalu has its origins in this tiny settlement. 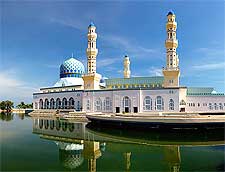 The early years of the 20th century, around Kota Kinabalu, were characterised by uprisings and rebellions against the British Colonial masters by local Malay and Bajau tribes, as well as by pirate attacks from the South China Sea. In spite of the unrest, Jesselton soon developed into a major trading post, receiving goods from the interior via the railway and shipping them overseas. Rubber was an important commodity, along with locally produced honey, rattan (made from palm leaves) and candle wax, all exported via the thriving community.

After the Japanese bombing of Pearl Harbour, the British retreated from Borneo, burning the city almost to the ground as they left, to prevent its occupation by Japanese invasion forces. Arriving on Borneo on 9th January 1942, the Japanese military remained in control until the Australian forces' counter-invasion in 1944.

Towards the end of the war, what remained of Jesselton was destroyed by Allied bombing, with only three buildings still standing amid the devastation. The defeated Japanese forces finally left Borneo on 15th October 1945, over a month after the war officially ended. 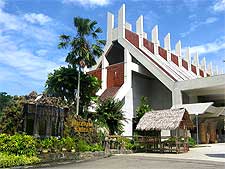 Post-War to the Present Day

Rebuilding of the city began after the British North Borneo Chartered Company handed over its holdings to the British Government as part of the Dominions. In 1961, Malaya, North Borneo, Sarawak Brunei and also Singapore all came together and negotiated the formation of a single state, Malaysia, and in 1963, the region and its newly rebuilt capital became Malaysia's Sabah state.

Jesselton's troubled history was forgotten when the city was renamed Kota Kinabalu in 1968, and in 2000 it was given official city status by Malaysian governmental decree. 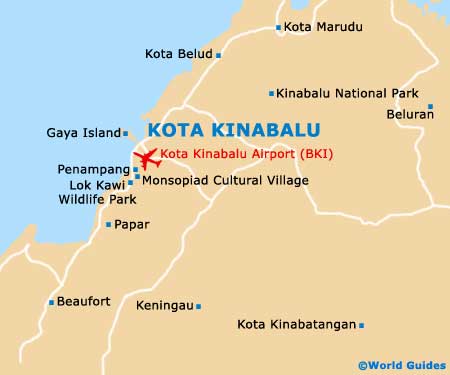