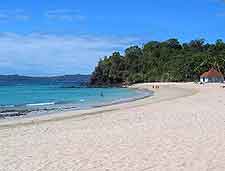 Home to a lengthy coastline stretching for more than 2,900 km / 1,800 miles, Madagascar certainly boasts more than its fair share of beaches and coastal attractions. A number of dreamy islands lie just offshore, such as Ile Sainte Marie, Nosy Be, Nosy Komba, Nosy Iranja and Tsarabanjina. These island beaches often offer superb scuba diving and snorkelling conditions, providing the chance to observe an abundance of marine life and some beautiful coral reefs.

Many of the most appealing beaches of Madagascar are quite deserted and a little off the tourist-track, with their wild and natural appearance being a big draw. Others are more commercialised, being seaside resorts in their own right. 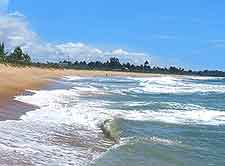 The following are amongst the most popular and noteworthy beaches and resorts of Madagascar:

Ile Sainte Marie
An easterly island with tropical beaches, turquoise waters and a fascinating pirate heritage, Ile Sainte Marie is known for its seasonal whale watching, wreck diving and snorkelling opportunities, although do be careful not to stand on one of the numerous sea urchins.

Le Paradisier
Lying on the far south-westerly side of Madagascar, close to Ambohimahavelona, Maromiandra and Toliara, Le Paradisier fronts the Mozambique Channel. This pristine beach is a good base for exploring the Ifaty lagoon, sailing and sea kayaking, and between May and October, it is often possible to spot humpback whales swimming by.

Manafiafy Beach
On the south-eastern side of Madagascar, Manafiafy Beach lies next to St. Luce Bay and is fringed by dense forests and palms. The Rainforest Lodge here features six beachfront bungalows, each with their own terraces and breathtaking ocean views. 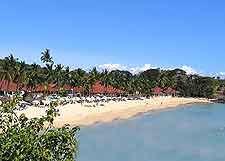 Nosy Be Island
The volcanic island of Nosy Be lies just off Madagascar's north-westerly coastline and is part of a small group of islands, being close to Nosy Komba, Nosy Mitsio, Nosy Tanikely and Nosy Sakatia. A leading beach destination, Nosy Be comes with luxury resort hotels and plenty of water sports opportunities - namely swimming, scuba diving, snorkelling, parasailing and deep-sea fishing. There are also some scenic trails suitable for hiking and cycling. 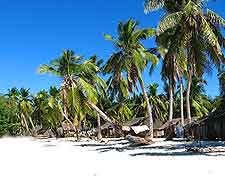 Nosy Iranja
Nosy Iranja is made up of two adjacent islands (Iranja Kely and Iranja Be), which are connected by a lengthy sandbank. The marine life here is particularly special, with both the Green Sea and Hawksbill turtles choosing to nest on these beaches. For luxury oceanfront accommodation in Madagascar, the Iranja Lodge is worth looking out for and is able to arrange dolphin excursions, whale-watching trips and shark diving. 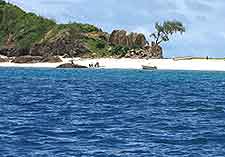 Tsarabanjina
Another major island resort in north-western Madagascar, Tsarabanjina is part of the Mitsio archipelago and is situated approximately 64 km / 40 miles from nearby Nosy Be. Many white sandy beaches fringe the coastline of Tsarabanjina, with the outlying coral reefs lending themselves to snorkelling. Further water sports are on offer here, such as catamaran sailing, fishing, water skiing and scuba diving, with the Mitsio Coral Reefs being a notable dive spot. 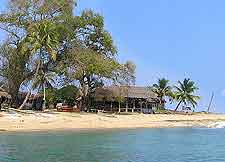 Tsara Komba
Sited on the north-westerly island of Nosy Komba, just north of Ambanja, is the tropical beach resort of Tsara Komba.

This spectacular beachfront is backed by a lush hillside and a series of rather rustic-looking bungalows, which make up the Tsara Komba Lodge. 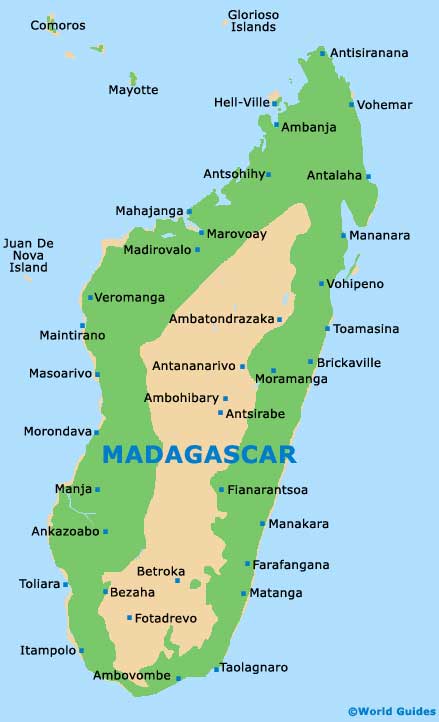