Langkawi is one of the top tourism draws in Malaysia, and indeed in South-East Asia. Lying off the north-west coast of Peninsula Malaysia, this destination is a sizeable archipelago made up of just under 100 individual islands, with Pulau Langkawi functioning as the main island and generally what most people are referring to when they say 'Langkawi'. The island has sublime beaches and some fantastic hotel resorts, along with lots of fun water sports and evening boozing at beachside bars.

Perhaps best known for its duty free shopping status, Langkawi is also widely associated with dubious myths and legends. There is an official tourist information office at the international airport and another in the main town of Kuah, along the Jalan Persiaran Putra.

Those enjoying a holiday on Langkawi generally come here for the beaches, with the western and south-western coast of the island being particularly developed and home to the sandy Pantai Cenang beachfront. Close by, the somewhat quieter and more understated Pantai Tengah is another beach of note, while the Pantai Kok beach comes with luxury resorts and a lively marina. Further beach resorts reside on the island's northern coast, around Teluk Datai and Tanjung Rhu. More information about Langkawi Beaches.

The constant and extremely reliable sunny weather is one of the reasons that Langkawi has become such a popular tourist destination. Many of the attractions are particularly family friendly and some of the best are to be found within Kuah Town and its suburbs. These include the Lagenda Dalam Taman Park, the Langkawi Bird Paradise, the Kedah Marble Quarry and the Gunung Raya Golf Resort. Kuah is also a good base for island hopping, with the town growing up around a large jetty, where ferries regularly arrive from Penang Island and mainland Malaysia. Other good themed choices include the Crocodile Adventureland at Teluk Datai, the Underwater World aquarium attraction at the Pantai Cenang, and the Oriental Village, where a neighbouring cable car provides a scenic way to reach the top of the Mat Chinchang mountain (Gunung Mat Chinchang). If you are enjoying the natural scenery, then a trip to the Durian Perangin Waterfalls or the Telaga Tujuh Waterfall will likely be in order. More information about Langkawi Tourist Attractions.

There are a number of noticeable landmarks scattered around Langkawi and often the most obvious are completely natural, such as the Lake of the Pregnant Maiden (Tasik Dayang Bunting) on Pulau Dayang. On the main island are a number of sizeable caves, with a visit to the Cave of the Legends (Gue Cerita) recommended. Nearby, you will find an interesting beach, where anchovies are dried in the sun on special mats. At Kampong Mawat, both the Kedah Traditional House and Mahsuri's Fort are notable man-made highlights, and nearby at Padang Matsirat, the Field of Burnt Rice is a spot steeped in history, since it was here where in the 19th century the locals burnt their rice fields in order to prevent their use by the attacking Siamese. More information about Langkawi Landmarks and Monuments.

Although it may well be the beaches and shops that draw the biggest crowds on Pulau Langkawi, there are some very reasonable museums here as well. Near to the beach at Pantai Pasir Hitam is the Craft Cultural Complex (Kompleks Kraf), where weaving demonstrations and information about local Malaysian handicrafts await. The Laman Padi Rice Garden is sited on the northern side of the Pantai Cenang beach, with paddy fields accompanied by displays clearly documenting everything that you would ever want to know about rice cultivation in Malaysia. Other cultural highlights include the Ibrahim Hussein Foundation Museum and its contemporary art gallery, the monuments at Lagenda Park, and the renowned Galeria Perdana at Kilim village, where seemingly random and rather extravagant international gifts to a former Malaysian Prime Minister are exhibited in all their glory. More information about Langkawi Museums.

From the main island of Langkawi, tourists often choose to allocate some of their holiday time for island hopping. Day trips to neighbouring islands often depart from Kuah and include those of Beras Basah, Dayang, Payar and Rebak. Located to the far south, the island of Penang is packed with colonial character, especially around its capital of Georgetown. The Pulau Payar Marine Park is a good bet for beaches, scuba diving and snorkelling, with its crystal clear waters being home to some exceptional coral reefs and marine life. If you have the time and inclination, you can even venture northwards to Koh Lipe in Thailand, which lies within the Tarutao National Marine Park and boasts fine beaches and various water sports. More information about Langkawi Attractions Nearby. 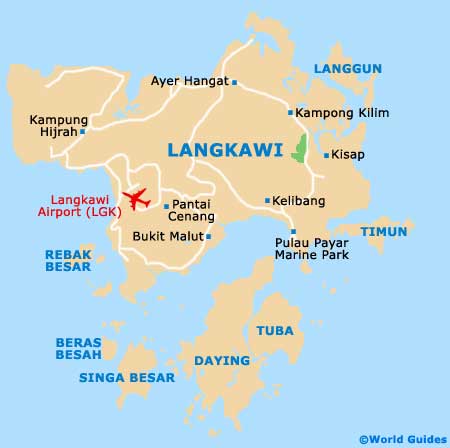